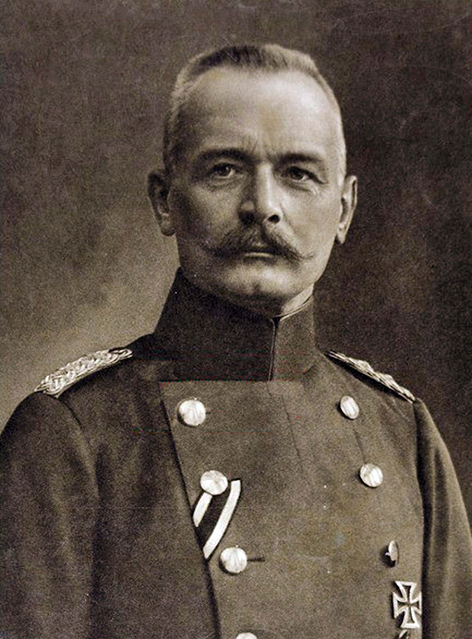 Erich von Falkenhayn, the man behind the Battle of Verdun.

The winter of 1915-1916 was a grim time for all the combatants of the Great War. Serbia, the little nation that could, fell to the Central Powers. Austria-Hungary hung on by a thread. Huge costly battles at Ypres, Artois, and Champagne taught the commanders of both sides the futility of sending frail, if brave, men of flesh against walls of lead and steel. Having no other strategy, however, both sides continued doing just that.

Up until the Great War, battles involved maneuver and strategic combat. Armies jockeyed for position until one reached a superior and unassailable position; the other side would realize the hopelessness of continued resistance and the battle, and by extension, the war would end. The object was to MOVE and take ground to hold until you had so much of the enemy’s territory he had no choice but suing for peace. Unfortunately, World War One did not behave in such a fashion. After eighteen months the war had ground down to trenches.

Most commanders looked at the vast line of trenches from Switzerland to the North Sea and saw only despair and hopelessness. It seemed no arm of flesh could break the stalemate which was war on the Western Front. One man, however, looked at that heartbreaking line of trenches and saw not despair, but opportunity. That man was German Chief of Staff Erich Georg Anton von Falkenhayn. He saw the Western Front for what it was — a meat grinder for men instead of beef or pork. With such clear eyed vision, he came upon a new plan for warfare.

Falkenhayn’s plan was both simple and diabolical. Since this war seemed to be only about killing men instead of capturing territory, he would simply design a perfect meat grinder. In his own words, he planned to “bleed France white.” He would pick a point along the line which he KNEW France would defend to the last man and launch a continuous attack against it. France would be forced to keep bringing more men to defend the position and German machine guns and artillery would kill them faster and faster until no more “meat” was left for the “grinder.” He was proposing a dedicated war of attrition. The object was never to actually TAKE the position chosen as bait, but to make France defend it until the last man. Then, with France bled dry, the U-Boats would starve England’s island home out of the war.

For his bait, Falkenhayn chose the picturesque fortress town of Verdun.

It is impossible for anyone not French to understand the importance of Verdun to the French people except by analogy. Verdun is to the French what The Alamo is to Texans, Jerusalem is to the Israelis, and Mecca is to the Moslem. Verdun is more than a piece of ground . . . it is sacred. From the Fourth Century, men first known as Franks under Charlemagne had defended a fortress at Verdun. Under Napoleon, the fortress at Verdun withstood repeated attacks by the Coalition, but it was during the disastrous Franco-Prussian war of 1870 when Verdun took on its most holy shroud.

The Franco-Prussian War was an unabashed and unmitigated disaster for the French.  The Prussians — ancestor state to the German nation — ran roughshod over France. The French lost battle after battle. Things were so bad the government actually changed from the Second Empire under Napoleon III to the democratic Third Republic. It didn’t help. Whole French armies were surrounded and surrendered completely. Paris fell under siege. The entire country lay under the Prussian heel — except for the mighty fortress at Verdun. Here the French flag flew until the last. Verdun held under a siege which lasted almost the entire 18 month long war. She never fell, but surrendered when ordered to by the capitulating French government.

Falkenhayn knew all this. He knew Verdun was a symbol to France, the place where she had once withstood the might of Germany and the ONE place she would NEVER surrender. Imagine if the Mexican army had invaded Texas during the Mexican War in the 1850s. Volunteers would have poured into the Alamo to defend it rather than let such a cherished shrine of Texas might fall to anyone. So it was with Verdun. The trap now had its bait. All that remained was for Falkenhayn to crank up his meat grinder and see how many Frenchmen he could kill before France cried, “Oncle!”

He would push the start button on that diabolical machine 21 February 1916 and France would indeed bleed profusely.

Look for more about the Battle of Verdun in the next week or so, but until then, Love y’all and keep those feet clean!