Stardate 8 September 1966 a little known and lesser heralded science fiction show debuted on CBS. This little one hour space drama would only last three seasons — less than 100 episodes — but it would change the lives of countless people then yet to be born. Of course the show was Star Trek, known in Trekkie parlance as The Original Series or TOS to distinguish it from Star Trek: The Animated Series (TAS); Star Trek: The Next Generation (TNG); Deep Space Nine (DS9); Star Trek: Voyager (VOY); and, most recently, Star Trek: Enterprise (ENT). Anyone on the set back then would have been dumbfounded to know they were kicking off a bona fide cultural phenomenon and fifty years, six (soon to be SEVEN) TV series, and thirteen feature length movies later, Star Trek would be an actual way of life for some people. All you have to know is the Holy Bible is available in Klingon.

Most Trekkies these days don’t realize how rocky their beloved franchise’s start truly was. Critics blasted the plots, the premise, the acting, and anything else they thought of. It was an ensemble cast of relative unknowns who would all end up being household names revered around the world today. Though time has taken several of them — Bones, Scotty, Yeoman Rand, and just this year Spock — those left are still the darlings of any convention they choose to attend.

I discovered Star Trek during the summer between fifth and sixth grade, a period I like to call the Babylonian Exile, when I was a lonely, bereft kid living in Columbia, SC for what seemed like the longest three months of my life. I was flipping channels . . . by hand, no less . . . and I saw a green girl dancing. I stopped and by the end of the episode, I was a devoted fan. I fell in love with Star Trek before I discovered Tolkien and Middle Earth, which is still hard for me to believe since I favor fantasy over science fiction these days. I spent every 3:00 hour that summer parked in front of the TV watching my new heroes Kirk, Bones, and Spock battle Klingons and Romulons . . . and each other more than once. When we moved back to the upstate, I was delighted to find the show came on up here, too, and at 7:00 so I could watch it during the school year as well. For those of you tender youths who wonder why I didn’t just “DVR” it, at the time VCRs were a bit in the future and anyone proposing something like commercial free television on a “hard drive” would have been burned at the stake as a witch.

Star Trek: The Next Generation came out my junior year of high school. It ran on the brand new Fox Network on Sunday nights. Mama and I watched every episode and even once I went off to college, I wouldn’t leave to return to Clemson until 9:00 when that week’s episode ended. I’m not going to wade into the murky shark filled waters over which series is the best. A person can get flame broiled quickly for choosing the “wrong” series. I’ll say I’ve seen all of TOS, TNG, and VOY. Budge and I watched Voyager together one year when we caught the pilot episode in syndication just by chance one day after school. For the rest of the year, a “new” episode aired each day Monday through Friday at 4:00 and we watched Captain Janeway and the crew try to get home from the Delta Quadrant every night before supper. Of the three series I’ve watched in totality, I’m satisfied with each in its own way. Ideally, I’d like to catch a channel that aired a TOS episode followed by a TNG episode and finished off with a VOY 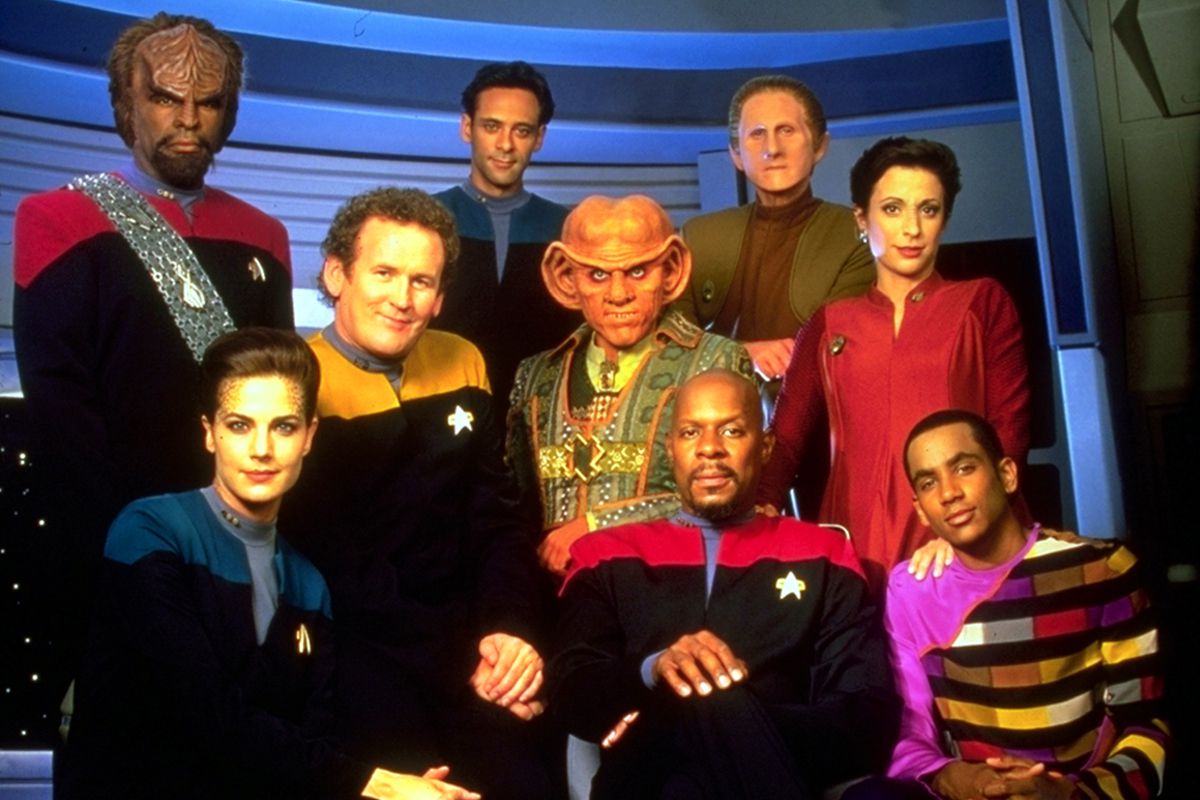 episode. I’d be a happy little camper then.

I watched a few episodes here and there of Deep Space Nine, but I never really got into it like I did the other series. For one thing, and this is a really petty point, the episode titles were way too long. I also despise Ferengi and having a station littered with the grasping little buggers aggravated me to no end. As for Enterprise, well, I’ve never seen an episode so I wouldn’t be qualified to judge its quality. I’m holding out high hopes for next year’s launch of Star Trek: Discovery because, success of the recent movies non-withstanding, I’m one of those who thinks Star Trek does best on the small screen.

one thought the way the writers rebooted the series while still maintaining continuity with the old timeline was genius. I know a lot of people wanted to scream deus ex machina, but hey, it worked . . . even if we did get a new Spock slightly more disposed to emotion. I’m not bucking any trends, however, when I claim The Wrath of Khan as being my favorite of the movie series. Spock dying to save the ship gets me every time AND it sets up the next few movies where Kirk steals a ship along with the rest of the gang, who even at this juncture are NOT as young as they used to be, in order to go find their friend.

At its core, that’s what Star Trek is all about — friendship. A loyal bunch of people in a tin can zooming through outer space with aliens and natural disasters constantly trying to kill them get multiple opportunities to save each other, depend on each other, and grow together. It’s the entertainment industry’s longest running buddy movie / road movie and even fifty years after a rough and rocky start, it’s still gaining new converts all the time.

Keep those feet clean and of course, live long and prosper, y’all!