I originally posted this on February 28, 2012 but with Lady Gaga singing the National Anthem at the Super Bowl AND the Grammy’s just passing by, I thought I’d run it again. Oh, and BTW, everything I say about Lady Gaga could just as easily apply to Miley Skankrous and some of the other pretenders to Lady Madonna’s throne.

I sooooo miss the ’80s. I was there and it was awesome.

I like Lady Gaga, but to paraphrase the infamous debate exchange between Lloyd Benson and Dan Quayle, “I watched Madonna come on the scene. I saw her take MTV by storm. Madonna was my teenage lust-crush and, Lady Gaga, you are NO Madonna.”

Let’s look at the facts. Lady Gaga wears outrageous costumes and has certain risque’ choreography in her videos and acts. Madonna made cone bras and lingerie-as-outerwear fashionable. How many young girls do you see walking down the street wearing a dress made of steak? Right. Now if you had been alive in the ’80s (aka the most awesome decade EVER) you would see girls from 8 to 80 rocking bustiers and fishnets without even standing on the corner. Fashion icon point? Madonna.

Lady Gaga is the stage name for Stefani Joanne Angelina Germanotta. Madonna’s stage name is . . . well, Madonna. You don’t get cool points for giving yourself a nickname. Nicknames are bestowed; they are earned through hard work and memorableness. Put out an awesome song that cements your place in music history and you get a nickname. Lady Gaga’s well-earned nickname is? Right, she doesn’t have one. Madonna? “The Material Girl,” a name she earned after channeling Marilyn’s turn in “Gentlemen Prefer Blondes”  in the video for the eponymous song. Nickname coolness? Madonna.

Next up is — for lack of a better word — groundbreakingness. Lady Gaga? What’s she done that’s never been done before? Matter of fact, what has she done that Madonna didn’t do before her? The word you are searching for is nada. What taboo walls did Madonna knock down, or more accurately, explode in a blinding flash of flame, fame, and diamonds? Let’s see. First, she writhed around in a pure white wedding dress for “Like a Virgin.” Then there was the “Borderline” blasphemous video for “Like a Prayer” where the erstwhile Catholic schoolgirl danced in next to nothing before a background of burning crosses. 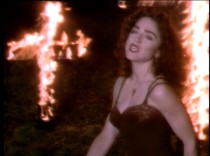 Can you say “Went over like a fart in church?”

If Skinhead O’Connor hadn’t torn up that picture of Pope John Paul II on Saturday Night Live, Madonna still would be persona non gratia at the Vatican. Oh, and how did she follow that up? She only put out the first video to get an X-rating in its initial release when “Justify My Love” was banned from being shown before midnight on MTV. I still remember being in a cramped and crowded dorm room on E-Hall in the Johnstone Dorms of Clemson University to watch that first showing. Then Madonna went on to release a book and a movie called Sex.

Then, just to show she still had the power to rock an audience with the unexpected, THE Material Girl frenched Christina AND Brittney (back when they were at peak hotness) while wearing a Marlene Deitrich suit just to pass the torch on to the next generation of hot women singers. Taboo destruction points? Madonna.

Still crazy after all these years.

So that’s 3-0 and game, set, and shutout to Madonna. Now with 7 Grammys and 13 MTV awards, Lady Gaga is off to a good start for sure, but she’s still got a ways to go to get 10 Grammys out of 28 nominations and turn 68 MTV nominations into 20 awards INCLUDING “Lifetime Achievement Award.” Lady Gaga is doing well for herself after five years, but can she sustain the flow and keep rocking into a third DECADE like Madonna? Only time will tell.

Of course, as much as I still love Madonna, I respect the fact that she too isn’t completely original.

The Ex-Mrs. Bono is past Social Security age, still rocking, and still pretty hot — thanks to the miracle of modern plastic surgery and despite the stress of having Chas as a daughter/son. Keep it up, girl!

And the rest of you rock on and keep those feet clean.