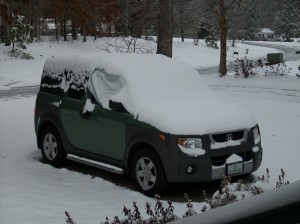 My Element in the elements

Okay, it’s cold around here. For everyone who doesn’t have access to a weather outlet, a huge cold system dumped anywhere from six to twelve inches of snow on us here in Upstate SC from Sunday night through Monday morning. Then, starting late yesterday afternoon, a soft misting drizzle coated the fluffy snow in a clear crystalline crust with the result being we won’t thaw out here for another week at least.

Budge’s district was out yesterday and by noon yesterday, their administration as well as every other district in this corner of the Heavenly Triangle that is South Carolina, agreed to phone it in again today. At the rate this stuff is not melting, tomorrow is very likely a wash and Thursday will be at least a two hour delay so the bus drivers have a fighting chance to spot the black ice slicks BEFORE the big yellow banana goes into the ditch. Of course, with this district extending all the way into the foothills of the Blue Ridge Mountains, some parts of the county STILL won’t be passable and my Budge may not go back to school this week.

The unfortunate issue in all the preparation for and fighting of the snow is it actually makes things a bit worse in the short run. Our state and county DOTs have been doing a masterful job of clearing the interstates and main artery state roads, BUT, while the plows clear the snow away quite effectively, they cannot help but leave a thin sheet of water on the now-exposed asphalt. This sheet of water becomes a sheet of ice just as soon as the sun goes down. So in a sense, all those plows out on the roads now are acting as giant yellow Zambonis creating a veritable plethora of ice rinks up and down the roads. This results in many drivers, especially those who have more horsepower than brains, pulling a Paul Simon and “slip sliding away.” 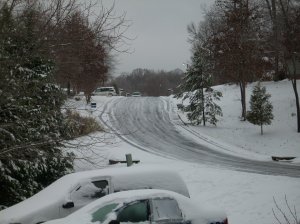 Slick, frozen hills like this are what will keep schools closed for a good while.

Skidding off the road isn’t so bad in most places in the main roads because about the worst you can do is slide into the median or onto the shoulder, but once you make a turn or two and get back here into the sticks a bit, flying of the road via a sheet of black ice can be fatal. I’m thinking of one spot less than two miles from here where a long curve over an old bridge meets a long, steady, SHADED uphill incline. Now I know as surely as I know I’ll never own a Porsche that stretch of road is going to be slicker than snot on a doorknob until Saturday at the very least. Remember the bridge and the curve I mentioned? Well, the bridge has nice concrete guard rails, of course, and a set of metal guard rails extends from both ends and both sides of the bridge for another ten feet or so and stops right where the curve begins. That means anyone sliding down that hill — forwards or backwards — has a straight shot past the guard rail and down a 50 foot embankment into the Reedy River below the bridge. That water is deep and cold and I’ve seen more than one car winched out of there followed by four rescue workers struggling up the hill with a human sized black plastic zipper bag held between them. 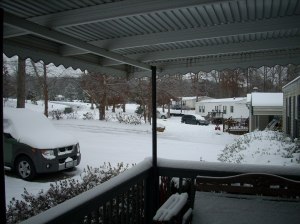 Still, people don’t learn. People get all broke out in dumb when the white stuff is on the ground. The worst offenders are Yankee expatriates and guys who have jacked up four-wheel drive trucks. The Yankees scoff at us poor benighted hillbillies who can’t drive on snow. I hear it all the time, “Why this is a dusting compared to what we get every day up in X part of Yankee-land, I simply can’t fathom why you people can’t drive on it!” Well, Goober, the reason we can’t drive on it — and you can’t either, by the way — is it’s NOT SNOW. Anyone CAN drive on snow. Snow is easy. Once the roads clear a tiny bit OR once they get nice and compacted, it’s not snow anymore though. It’s ICE and NO ONE can drive on ice. Even James Freaking Bond can’t drive on ice! Watch Die Another Day if you don’t believe me.

So, if you’re reading this around these parts, hunker down, make up some snow cream, drink a cuppa, and take a nice nap. Those of you up and out where this stuff is normal, be careful, and those of you in warmer, snow free clime — keep your obnoxiously sunny and cheerful opinions to yourselves.

Snow in the Southland is a rare commodity. Snow when people actually WANT it, like around the holidays, is nigh upon unheard of in these parts.

So, when the flakes started falling about sundown last night most of the grownups around me were just as giddy and giggly as the few children in attendance. Greenville County, South Carolina was experiencing the first white Christmas since 1963, according to our local weathermen.

The snow fell throughout the night and we were greeted by a blinding white landscape this morning. Of course, the Sun has peeked his head out now so what’s left isn’t likely long for this world.

Snow brings out a certain special madness among Southerners. We so seldom get a simple pretty snow that we aren’t quite certain how to take them when they come along. Here, our winter weather of choice is ICE. This region has been smacked by four big ice storms in my memory. The first big one I remember was in 1988. The Monday we went back to school from Christmas break, it started snowing and icing. We left school by lunchtime that Monday and didn’t return until Wednesday of the FOLLOWING week. We missed seven school days and got no spring break that year.

My sophomore year in college saw a big snow, too. I learned a very important lesson in that storm; education majors should not get into snowball fights with engineering majors — especially if said engineering majors have access to their engineering lab. Surgical tubing and some Gore-tex pouches will launch a slushball nearly 100 yards with enough energy to take a guy completely off a bicycle. The funniest part of that particular day, however, was the two foreign students from South Africa. They’d NEVER seen snow and were convinced the sky was falling and the world was coming to an end. After we bopped them with a few good snowballs and served both of them some homemade snow ice cream, they started to come around.

It was the ice storm of 2002 that caused the most damage of any winter weather I remember. We got three or four inches of ICE. This stuff had just enough snow mixed in for color. Ice isn’t like snow in any way shape or form other than being cold. Four inches of ice is HEAVY; heavy enough to bring down main power lines — the big boys on the steel towers, not just the smaller residential stuff. It decimated trees — especially pines and other evergreens that are soft woods and woefully unsuited for weight bearing. By the time the storm lifted, most of Upstate SC was out of power. Our neighborhood went five days in the dark and some of the more remote places, like Glassy Mountain up in Pickens, went a full two weeks without power. I saw crews from as far away as Alabama working on the lines. It was a serious mess, but ever since then, we haven’t had a major outage, mainly because all the trees and limbs threatening power lines came down in that storm!

So I hope all my northern readers will forgive me my excitement over snow. I realize y’all get more snow in a day than I’ve seen in my lifetime, but we don’t laugh at you when you can’t move in our July humidity, so you could go easy on us and our poor winter driving skills!

Now go out and have some fun in what’s left of the white stuff and when you come in, get those feet dried off and warm. I don’t want anyone catching his or her death over this Christmas break!

It doesn’t snow much in South Carolina. As a result, any MENTION of snow by one of the local meteorologists puts Palmetto natives into a straight out panic. It’s been that way ever since I can remember. Once as a student, my school was sent home by snow flurries at 9:00 AM and by noon, the sun was out and all the snow was gone!

The craziest symptom of southern snow fever, however, is the run on the dairy aisle at the Bi-Lo. I don’t know why, but people buy three items and pretty much only three items as soon as snow is forecast. They buy eggs. They buy milk. They buy bread. Why? You can’t make much of a sandwich out of those ingredients. Even fried egg sandwiches won’t go far.

So, all I can figure is everyone who is afraid of getting icebound in Carolina has one thing in mind — French Toast. We may be frozen solid; we may not get to leave the house for weeks, but if the power goes out, we’ll be able to make French Toast on the Kero-Sun kerosene heater. Why? I’ll never know, but it’s just one of the joys of being a Southern native.