The British Army at the outset of the First World War was at once a fantastic asset to the Empire and woefully inadequate to the task at hand. With the world’s strongest navy guarding any approach to the British Isles, the role of the army had heretofore been guarding the colonies and territories around the world while a small contingent remained in the Home Islands to deal with what remained of any force foolish enough to try landing on Britannica’s holy shores. On the other hand, this small army was completely made up of professional volunteer men. Practically every man in a British Army uniform had seen some type of combat in some far-flung fighting in southern Africa or in India. They were a proud, hard, disciplined corps of men the equal or superior of every other standing army any nation could field.

Alas, they were also entirely too few to fight the war they went to take part in. Some estimates claim less than one in five of the original professional army that sailed for France in August 1914 remained alive and uninjured by spring of 1915. If Britain was going to stay in the war, she was going to need many, many more men.

The task of supplying the army with fresh troops fell to the Secretary of State for War Field-Marshal Lord Horatio Kitchener. By the time recruitment drives began, word of the horrific fighting and conditions was trickling back from the Western Front and people began seeing the wounded returning as well, both of which tended to lessen fervor to fight for King and Country. What’s more, Britain still demanded a volunteer force. Essentially, Kitchener’s office had to convince fit young men — and some not so young — to willingly sign up for nothing short of a tour of Hell on Earth. Two methods of boosting the recruitment were particularly successful, at least in the beginning. One relied on shame and the other on friendships.

Today, young men — and women — can enlist in the military along with some friends and if they all enlist at the same time and qualify, they have a good chance of spending basic training together. After basic, however, they will most likely be split up unless they happen to be in very specific job sectors within the military. This camaraderie helps during the tough times of basic training and maybe alleviates some of the homesickness. In Britain during the First World War, the idea of camaraderie went to an entirely different level in the attempt to boost enlistment. Men who enlisted together and who wished to would be guaranteed to remain together not only for basic training but also for posting to the lines as well. 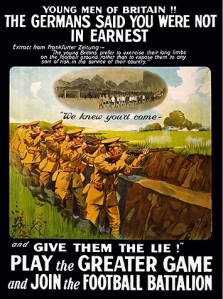 These guarantees lead to what we now call the “pals brigades” or “pals battalions” and though the idea may have seemed like a sound one, in practice is was nothing short of horrific. Under the auspices of fighting together, young men of the same town, the same fraternity, the same school, etc would enlist together. As promised, they would go through training together and — as promised — they would go to the front lines to fight side by side. This led to units with names like “The Grimsby Pals,” “The Stockbrokers,” and “The 1st Footballers.” These were men who had known each other for years, some since mere childhood, and now they were to march off to war as a unit.

Unfortunately, in a war of heretofore unknown amounts of casualties, the pals battalions had unforeseen consequences. In some of the bloodiest offensives like the Somme Offensive of 1916, entire units would simply be wiped out. Now, this was terrible enough when the casualties spread across several towns or counties, but with the pals battalions, a single town might see almost all of its young men of fighting age killed or horribly wounded in a single engagement. Thus what was tragedy enough was magnified tenfold over by the loss of so many in one place at one time.

A man confronted by harpies of the White Feather Society.

The second major recruiting tool was shame in the form of the Order of the White Feather. This society enlisted the services of women to shame men into signing up to go be blown to bits. A standard tactic involved a group of young ladies, often quite a large group, surrounding and berating a male of supposedly obvious fighting age as to why he wasn’t up at the front to “do his bit” with the rest of the fighting men. At the end of the harangue, one of the harpies would tuck a single white feather — a traditional symbol of rank craven cowardice in Britain — into the poor victim’s lapel and smugly walk away. We have records of plays stopping unexpectedly in the middle of a performance in order for the ladies to stalk up and down the aisles passing out white feathers to men who made the mistake of relaxing when it seemed they should be fighting.

The White Feather Campaign was actually extremely successful. It led to multitudes of men enlisting to fight the Kaiser for King and Country. Some of those men were large boys, often 15 or 16, who had been mistaken for fighting age by the incessant White Feather women. Instead of bothering to try explaining, these boys would lie about their age and take their places in the line. The harassment reached a point where returning soldiers received a badge to wear showing they had served already or were simply at home on leave.

Predictably, however, the White Feather Society produced some terrible embarrassment for its members at times. For instance, Able Seaman George Samson was delayed from attending a ceremony by a group of women who insisted on giving him the white feather since he wasn’t in uniform. Seaman Samson was, at the time, on his way to a ceremony where he was to be given the Victoria’s Cross — Great Britain’s highest military award — for his courage and gallantry in battle at Gallipoli.

The recruiting office undoubtedly had a hard job and one made all the harder since no one really wanted to see these young boys going off in khaki and coming back in linen so often. In time, volunteering no longer kept pace with the demand for fuel for the fires at the front. In those dark days, Great Britain did what she had never done before and instituted conscription. Now, men would be compelled to serve rather than asked to volunteer. It was a terrible time indeed.