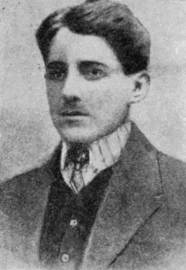 Gavrilo Princip, the man who lit the fuse.

“Europe today is a powder keg and the leaders are like men smoking in an arsenal … A single spark will set off an explosion that will consume us all … I cannot tell you when that explosion will occur, but I can tell you where … Some damned foolish thing in the Balkans will set it off.”
German Chancellor Otto von Bismark, Congress of Berlin, 1878

One hundred years ago this week, the explosion the Iron Chancellor predicted occurred, right where he said it would, in the Balkans. The young anarchist Gavrilo Princip had assassinated Archduke Franz Ferdinand a month earlier in Sarajevo and thirty days of frantic diplomatic activity had come to nothing. On July 28, 1914, Austria-Hungary declared war on its tiny neighbor Serbia. From there, the decades old web of interlocking treaties of “mutual defense” and “promises to defend” ensured matters could only progress one way — war — the bloodiest, costliest, most destructive war mankind had yet known. World War II gets most of the press nowadays, but its safe to say World War I changed civilization in a much more fundamental way. It destroyed the old orders and old traditions in a storm of blood and fire; what emerged would be barely recognizable to men of just a generation before.

“The trenches” are the iconic image of World War I, but the grainy black and white photos of the battlefields cannot truly portray the hideousness of the conditions. For one thing, one cannot smell a photo. Accounts of the men who fought and died in the trenches make constant mention of the stench pervading the battlefields. Bodies lay strewn across No-Man’s Land for months or even years. Often those who died in the trenches would be entombed in the trench walls. Pictures that get much less exposure in the centennial celebrations show trench walls studded with hands, arms, and legs all poking out from the walls of mud. Men dug holes in the trench walls, shoved their comrades into the open earth and walled them up again. It was gruesome and ghoulish and eminently pragmatic. The corpses rotting under the Flanders sky point to the primary point which made World War I so revolutionary — dealing death had become industrialized. 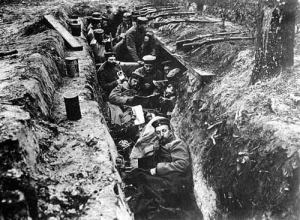 Over the course of  military history from the earliest battles with sticks all the way up to the Great War, weaponry had changed slowly, but tactics were basically the same. In Alexander the Great’s time, a bunch of men with long spears lined up shoulder to shoulder and charged another bunch of men with similar spears. Under Roman rule, the gladius and the pilum carved out an empire, but the basic military mindset remained the same — two armies lined up with similar weapons and tried to kill each other. At Agincourt, the English longbow replaced the javelin but the two lines of combatants still converged to the final slaughter. Even gunpowder hadn’t really changed things so much. Instead of lining up with spears, men lined up by rank and column with horribly accurate muskets and closed with the enemy amidst fire and smoke. Massed infantry charged massed infantry and whoever broke ranks first would be wiped out by the cavalry waiting in the rear.

Hiram Maxim changed all that around 1885 when he took the advice of a dinner companion who told him, “If you want to make a pile of money, invent something that will enable these Europeans to cut each others’ throats with greater facility.” Maxim did indeed make a pile of money and the invention which was the cornerstone of his fortune made an even bigger pile of bodies. Hiram Maxim invented and perfected the first portable and fully automatic machine gun. Along about the same time, Alfred Nobel perfected dynamite and TNT which enabled artillery to destroy larger targets at longer ranges than black powder cannoneers could have dreamed. 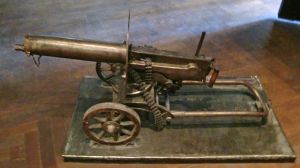 “Whatever happens we have got / the Maxim gun and they have not”
But, alas, by now, they did.

Unfortunately, no one bother to explain to the generals in charge of this new warfare that times had changed. As a result, they used the same tactics on the Western Front that had defeated Napoleon. Massed groups of men with bayonets fixed to their rifles sprinted across fields towards the enemy, but this time, the enemy wasn’t running towards them in response. Instead of spears or muskets, the masses of infantry met the Maxim gun. A famous simile from the time said “men were scythed down like corn and wheat” by the hail of bullets which were deadly — not at the 100 yard range of the musket — at 1000 yards. Before long, sensible men began to dig trenches to avoid the machine gun fire. Still, the generals were an unimaginative group and slow to learn so every so often great clouds of men — Allied or German — would be rousted from the relative safety of their rat infested and waterlogged trenches to run screaming across No Man’s Land at the machine guns of the other side. Most of them would add their bodies to the great masses of corpses rotting on Flander’s Field. This madness went on and on with generals on both sides sacrificing the lives of an entire generation of their nations’ young men for gains which were measured — literally — in feet or sometimes yards.

As time went on, however, men began to devise ways to break this awful stalemate situation and those who thought the machine gun and the Bertha gun were the worst weapons man could dream up realized they were only glimpsing the tip of what was to come. As bad as it was, things were going to get exponentially worse.

I’m going to write more on World War I events over the next few months so if you like history, watch out for those posts. It won’t be all I talk about, but I believe World War I really was the most pivotal moment in history since the birth and Resurrection of Jesus Christ. It created wounds on our collective souls that have not healed to this day and likely never will.