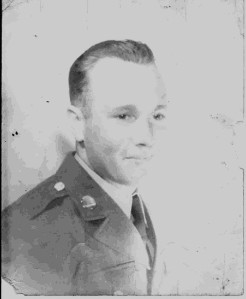 Today marks the 75th anniversary of the Normandy Invasion, aka: D-Day. My beloved Papa Wham was there. I wrote this post June 6, 2015 for the 70th anniversary and I wanted to rerun it in memory of Papa and all the other brave boys who hit the bloody beaches all those long years ago. We will never see their like again and precious few remain.

Today more than any day of the year, I think of Papa Wham. More than his birthday (July 7), more than Christmas or Thanksgiving, more than Father’s Day, more than the anniversary of his passing (July 17), the anniversary of the D-Day invasion is my memory of Papa. This year is the 75th anniversary of the Operation Overlord invasion that finally opened up the second front in Europe the Soviet Union had been so adamantly insisting upon for years. Seventy-five years since the beginning of the end for Hitler and his 1000 year Reich. For Papa Wham and thousands of young men like him, it was another day away from home and the people they loved. I’ve seen the news coverage of the ceremonies in the Normandy cemeteries and I’ve marveled at the large number of veterans of that day who made the trip back to those stormy cliffs to remember. None of them are younger than their late 80s, but every single one of them stands as straight as age and appliances will allow as the colors troop past and the national anthems play. These are not young men and for many of them, this will be their last tour of the battlefields of their youth. It’s nearly a cliché now, but this is the flower of America’s Greatest Generation and those flowers are quickly fading.

If Papa were still with us, he’d be 102. This year will mark twenty-five years since his passing. It’s been two decades since I’ve seen his gentle smile and heard his sweet voice. To have known my papa when I did and as I did — as my beloved grandfather and one of the two greatest men I’ve ever known — was not to picture a warrior primed for battle. Papa ran a service station then an auto parts store. He vacuumed the house for Granny Wham on Saturday mornings and dozed off sometimes in church on Sunday mornings when Preacher Jeff wasn’t holding his attention. He loved baseball — especially his Atlanta Braves. He loved me and each of his three other grandsons (though I’m pretty sure I was the favorite.) I just never viewed my precious Papa Wham as anything other than my papa.

As I’ve gotten older, though, I’ve often wondered what Papa thought about “his” war. I never asked him for any details. I was too young to know how to gently and politely ask an older man about his service and Papa never volunteered his thoughts on anything but the most innocuous incidents, the funniest stories. I wonder about things now though. Papa was in his middle 20s when he went to fight the Nazis. He was a small town South Carolina boy riding to war on the Queen Mary ocean liner. What was he thinking 75 years ago today as his LCI splashed towards the narrow strip of sand? If I’ve heard correctly, Papa was in the third wave of the invasion, which meant the beach was still “hot” in terms of enemy action. Was he scared? I can’t imagine Papa Wham being scared any more than I can imagine Daddy being scared, but having watched the invasion scene of Saving Private Ryan time after time, I can’t see anyone in one of those boats not being terrified.

I know from his service record that D-Day wasn’t Papa’s first rodeo. He’d landed in North Africa during Operation Torch. He had been at Anzio and had taken part in the Sicily campaign. Still, this was attacking Hitler’s Atlantic Wall of Fortress Europe. I wonder how many friends he’d made in the two years of serving with the First Infantry Division, “The Big Red One.” I wonder how many he had seen maimed or killed in terrible ways. Had he ever killed anyone? I simply can’t see Papa as a killer, but it was a war and a terrible, bloody war at that. I know he could shoot because I’d seen him do it, but did he ever shoot a man? If he did, I never knew and I was brought up too well to ask.

What did he do in England during the build up for the invasion? What about during the days on the road in France when every American soldier was a liberator and a hero? Papa was dashingly handsome; especially in his uniform. Did he turn the head and catch the eye of a pretty English shop girl? Did he spend a quiet hour with some lovely French maid? To me, it’ll always be “Papa and Granny” but Papa wasn’t married to Granny yet and he was a long way from home with the possibility of being killed dogging his every step. I know it would seem scandalous to some — especially my Aunt Cathy — but I would hardly think less of my precious Papa Wham if he’d spent an evening with a European girl. He was kind and sweet and if Granny Wham loved him, why couldn’t a red-headed Scottish lass have been taken with him as well? I think entirely too much of Papa and his steadfast integrity to even entertain the idea I may have some kin on the other side of the Pond I don’t know about. That’s just not the kind of man Papa was . . . but if it did turn out I had a Belgian relative or two, I certainly wouldn’t think any less of Papa. It was a war.

A war he fought 75 years ago thousands of miles from home. Oh the questions I wish I had asked.

Love you all and keep those feet clean!