I originally posted this in November 2010 under the title “Don’t Ask, Just Eat It.” As happens with lots of stuff I write, I promptly forgot I wrote it. Earlier this week, though I was having a conversation with some folks about favorite foods and it got me to thinking about foods and I vaguely recalled I may have written on the topic. So, I combed through the archive and found this one. It’s mostly the same, but I have reworked it slightly. I hope you like it.

A group of us were sitting around Sunday after an impromptu pizza dinner and we started talking about food. We talked about favorite foods and foods we hated and someone – I believe it was my stepmother-in-law – broached the subject of what kind of -vore humans are. Someone had once told her that we are anatomically designed to be herbivores because of our extended digestive tracts and lack of sizable canine teeth. Apparently, whoever told her that figures all meat eaters have to have short colons and saberteeth, but who really knows? Anyway, I assured her that humans are, in fact, omnivores and I offered as proof the fact that people the world over will eat pretty much ANYTHING.

My Exhibit A was the fact people all over the world consider raw oysters a delicacy. That’s right. You may be reading this yourself thinking how much you’d love a plate of oysters on the half shell right now. Do you know what that means? Sometime in the past, somebody was walking down a beach and probably cut himself (or herself, let’s be inclusive) on an oyster bed. For whatever reason, this distant shore-dwelling ancestor of ours pried the oyster apart and thought the phlegm-like mass lying before him was the yummiest thing he’d seen all day and proceeded to chow down. Raw oysters are proof positive people will eat whatever! It’s that way all over the world. Every culture has delicacies that just don’t sit well with others’ ideas about edibles. 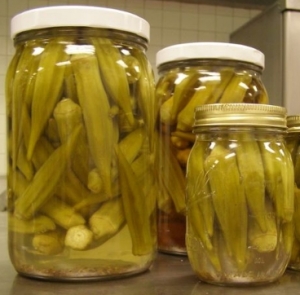 Just take my wonderful homeland of Dixie. People down here eat something called collard greens. If you Yankees and other foreigners want a good idea of what collard greens are, next time you cut grass, empty your mower bag into a 20 quart stock pot and boil for about four days. Add vinegar. Enjoy. People around here love that stuff. To me, it looks like someone already had a go at it before me.

Another godawful Southern “delicacy” is boiled okra. If you don’t know what okra is, Google it. Once you have a picture of this strange vegetable in your mind, picture it boiled and canned. People exist who love it. I believe those people also ate their own boogers when they were small as well because boiled okra is as close to snot as you can get outside a nose — or a raw oyster.

We southern boys don’t have the market cornered on strange stuff to eat though. Look at Scotland. Their national dish is some concoction called “haggis” which I’m pretty sure is Gaelic for “this is made out of what?!!” Haggis is a bunch of chopped up meat bits — the origins of which are better left unknown — topped off with oatmeal and spices. The whole kit’n’kaboodle is chopped up, swirled around, salted, and stuffed into a SHEEP STOMACH, sewn up, and boiled. People in kilts everywhere eat this. You have to go to Scotland to try it though because most countries won’t allow it to be imported for various food safety issues?

My, my, my! Doesn’t that stuffed sheep stomach look delish?

See, it’s dishes like haggis (and raw oysters) that make me wonder about our distant ancestors. I mean, look at eggs. Who is the first caveman to stare at a chicken and say to his hirsute brethren, “Ug, omaoma mooka go mabab mambo,” which loosely translated from Old High Caveman means, “I think I’ll eat the next thing that drops out of that bird’s butt!” You stop to think about that a minute. If these old boys had mistaken a rooster for a hen, breakfast could be a WHOLE lot different to us today.

Truthfully though, people will eat anything that can’t get away from them. In several parts of the world including Iceland, most of Scandinavia, and great swathes of Southeast Asia, people eat fermented fish. Basically, they bury, box, or barrel up a bunch of fish with some salt and stuff and wait. Eventually, the stuff rots enough and they bring it out and slap it on a cracker! Um, um good! REALLY?! Who was walking down the beach and came across a fish carcass riddled with scavenger holes and thought to himself, “I bet this would taste awesome with a little salt on a Ritz,” ?! In Norway, and parts of Minnesota by extension, they mix herring in with lye to make a concoction called lutefisk. LYE, PEOPLE! It comes in a can; we used to use it in chemistry class in high school. It unclogs drains in sinks. Folks, if the recipe says, “add two cups of Drano to the fish mix,” y’all can just leave me out.

Of course, I mentioned Southeast Asia and I know we’ve all heard the jokes, but some of it isn’t a joke. Dog, cat, and rat are all considered delicacies in places like Thailand and Vietnam. The country folk in those nations don’t make a big ceremony out of it either. They’ll just stick a field rat on a skewer and pop it over a fire. Next thing you know, roasted rat.

Now please understand that I’m not making light of anyone’s plight. Some people eat what is available and I understand that, and I also know if you get hungry enough because you’ve been without food long enough lots of this stuff might seem seriously tasty. I’m not talking about those situations. I’m talking about stuff people eat when they could have a peanut butter and jelly sandwich or something.

For example, someone explain “fugu fish” connoisseurs to me. For those that don’t know, raw fugu (or puffer fish) is considered a delicacy in Japan and commands HUGE sums of money. Just one little problem — if the chef doesn’t prepare the sashmi PERFECTLY, you will become paralyzed, suffocate, and die about thirty minutes after dinner and that’ll really put a crimp in your movie plans, now won’t it? These people are eating something they KNOW will KILL them if just a tiny little bit of the wrong organ is missed in preparation. The aficionados of fugu claim to like the “thrill” of cheating death as well as the pleasant “tingling sensation” even properly prepared fugu creates on the tongue.

Right! I’ll stick with my Long John Silver’s fried shrimp thank you. I can get a tingling sensation on my tongue eating Pop Rocks and drinking Coke.

Still, just to show I’m not trying to bash the Orient, people in Sardinia have a local favorite called “casu marzo.” This is a local cheese that is so “good” it’s illegal. Actually, the legality of the cheese has nothing to do with it’s flavor. No, casu marzo is made by leaving strong goat or sheep cheese out for flies to infest with maggots. Yes. You read that correctly. Part of the preparation is to have maggots crawl through the cheese, eating and pooping as they go. Apparently, the maggots “pre-digest” the cheese and give it a unique taste and texture not possible any other way. Don’t worry though. These people aren’t savages. They don’t eat the maggots. In fact, you can’t eat the cheese with the maggots in it because this particular species of “cheese maggot” is impervious to the hydrochloric acid present in our stomachs.

That’s right. Our stomach contents can dissolve steel, but these maggots just swim right through it. Then, all nice and warm in the digestive tract, they can — and have — munch right through the intestinal wall into the body cavity and introducing the contents of our colons (poop) into our abdomens. That, boys and girls, produces a little condition we like to call septicemia or septic shock. Simply put, forget and eat a maggot with your cheese cracker; die a painful, lingering death.

All for a piece of cheese? Really? So who looked at a hunk of cheese someone accidentally left on the table in the garden and now it’s crawling with maggots and thought to himself, “I bet those maggots made that cheese something special. I think I’ll try some!” Now he probably died of septicemia since he didn’t know about the gut-eating-maggots, so that means someone ELSE thought the same thing. He just thought it might be better to knock the maggots off first. Wow.

So yes. Humans are most definitely omnivores. If it grows out of the ground or beneath it, if it crawls, runs, swims, flies, or even just lies there, someone, somewhere will put some ranch dressing on it, munch it up, and wash the whole thing down with a nice Chianti. All I can say is, “ewww.” I think I’ll just stick with ice cream and McNuggets!

Love y’all and keep your feet clean . . . unless you want your toe cheese to become casu marzo!!