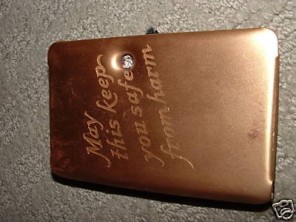 I was flipping channels a few days ago and caught the beginning of Saving Private Ryan. I always watch the first twenty minutes if I catch anywhere in them so I stopped flipping and watched Spielberg’s ultra-realistic version of the Normandy landings.

Now every time I watch those twenty minutes of that movie, it’s never Tom Hanks on the screen. It’s always Papa Wham. Papa Wham was at Normandy. It’s always him I picture wading through the blood-filled waters of the English Channel, hiding behind tank traps and, I suppose, wondering how a young man from Greenpond, SC ever managed to get mixed up in this mess.

Papa never talked about the war except for relating a few funny stories about what happened to him. I’ve read his DD-214 though. I’ve researched all the beaches he stormed during World War II. This time watching the movie it hit home with me how unlikely my existence is. If one of those German gunners on the heights overlooking Omaha Beach had panned left instead of right, Papa Wham might have died — like so many did that day — and I wouldn’t be here.

For years, Daddy had a dislike for Christmas Day. I never knew why until he told me one night after a few drinks. Daddy was in the Vietnam War and on Christmas Day 1970, his tank and two others were drawn up three abreast on a muddy road in the jungle. Out of nowhere one of the tanks took an anti-tank rocket blast from the trees. The tank was destroyed and three of Daddy’s good friends lost their lives. What if the young Viet Cong guerilla fighter behind that rocket launcher had sited the middle tank instead of the one on the right? Daddy would have died in Vietnam and I wouldn’t be here.

When I was conceived, Mama was in a half body cast. I know what you’re thinking and I don’t know how either. All Mama would ever say is “your father had been gone a year in Vietnam and where there’s a will, there’s a way.” Some things I prefer not to dwell on. Anyway, Mama was in that extensive cast because she pulled out of one of the gas stations in Gray Court and her car and an oncoming car hit head on at near highway speed. Mama’s leg was shattered and she had several other serious injuries, but the steering column on the car stayed intact instead of spearing her in the chest or crushing her abdomen as so often happened in those types of crashes. A little more to the left or the right? A couple of miles per hour faster? I wouldn’t be here.

Papa John had scarlet fever as a young boy. He lay near death for over a week because no one had money for a doctor. Big Granny prayed day and night for him at his bedside that he would be spared. Had God not answered her prayer, I wouldn’t be here.

Granny Ima had a condition in her early twenties that required her to undergo a complete hysterectomy at such a young age. The hormonal consequences were horrible and caused Granny problems for decades, but if she had been forced to have such a surgery only a little before she did? She couldn’t have borne Mama, and again, I wouldn’t be here.

Had Mama gone into labor with me as little as fifty years before she did, I would have died in childbirth, as would she have. I was completely oversized for a regular delivery. Had I been born in a time, not that long ago really, before C-Sections were perfected, Mama definitely would have died and they might have tried to cut me out after she passed but that didn’t work most of the time, so most likely, I wouldn’t be here.

Those are just six instances from stories I’ve heard in my family over the years. If the outcome of any of them had been different, I wouldn’t be here typing this right now.

Our lives hang by a thread. In a world of chaos like ours, it’s a small wonder anyone survives. The simplest of accidents and one would cease to be or even still, never have been born in the first place. Life is tenuous and could end at any moment. Take from that what you will.