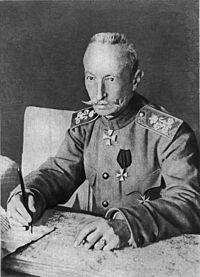 Debacles such as the Russo-Japanese War and the Battle of Tannenburg have earned a dismal reputation for the Russian soldier. Truthfully, nothing could be further from the truth. The average Russian soldier and his later Soviet counterparts were hard, tough fighting men capable of great feats. Unfortunately, this valiant soldiery had the terrible luck to usually end up saddled with criminally ineffective leadership. As a result, from the outside, it looks like the Russians were somewhat inept.

Every now and again though, the stars would align and the tough Russian fighting men would end up being led by a brilliant general or other officer. When that happened, the Russians could and did show exactly what they were made of. Such a confluence of greatness happened in the middle of 1916 along a sector of the eastern front of the Great War when an exceptional commander, General Aleksi Brusilov, fought for the chance to launch an offensive and from June to September 1916 almost singlehandedly knocked the Austro-Hungarian Empire out of World War I.

The origins of the Brusilov Offensive lay in an agreement by the Allies to launching simultaneous offensives against the Central Powers in summer 1916. For her part, Russia agreed to the terms of the agreement in hopes of securing arms and ammunition from the other allies, supplies which were in near disastrous shortages at home. She would lend France some troops on the Western Front and Britain some troops on the Saloniki Front but most of all, she pledged to launch a major attack along the Eastern front.

The plan was to launch the simultaneous attacks among the allies in the summer, but events at Verdun wrecked the timetable somewhat. As soon as Germany launched the massive assault against Verdun, France started begging anyone who would listen for help. France hoped any attack anywhere would draw Germans from the attack on Verdun. However, little happens quickly in Russia so it would be June before Russia would make good on her promise to attack the Eastern front, but when she did, she made it count.

The plan General Brusilov presented to the Russian high command was brilliant, simple, and designed to help the most allies. He planned to attack using his Southwestern Army against the Austrians across from him in Galacia. By launching a massive attack Brusilov hoped to ease pressure at Verdun and the Somme as well as helping draw troops from the Isonzo Front in Italy. Never one to mince words, Brusilov told the commanders he hoped to knock Austro-Hungary out of the war completely. He felt his plan would be effective because at the point of attack, the Russians vastly outnumbered the Austrians.

Rising casualties at Verdun and the Somme caused the Russians to move up preparations for the offensive. Brusilov had forty infantry and fifteen cavalry divisions arrayed along his front. Initially he faced thirty-nine Austrian infantry divisions and ten cavalry divisions. Later, however, in an effort to literally keep Austro-Hungary in the war, German reinforcements were brought up.

The offensive began 4 June 1916 with the obligatory artillery barrage. This barrage was different, however. The model which developed over the course of the war to this point was a long, drawn-out affair with days of pounding the intended point of attack with wave upon wave of shells. The Russians did not have the ammunition for such a protracted firing spree so this barrage was focused and proved to be extremely accurate but most of all, it was short. Because the barrage was so short, the opposing force didn’t have time to rush reinforcements to the point of attack the barrage would herald. The shorter attack also chewed up much less of the battlefield, enabling the Russians to advance at a much faster pace.

The initial attack was highly successful as three of Brusilov’s four army groups advanced on a wide front. In addition to a short barrage, Brusilov also used another innovation in his attack, one that would later form the basis for military doctrine all over the world. He used small units, then called “shock troops”, to attack certain weak points with precision. This was in contrast to the usual full scale, “over the top” wave charge across no-man’s-land typical of the Great War to this point. It work well. The small squads could infiltrate a small hole blown in the line and hold it while clipping wire and removing other obstacles to enable the larger force to pour in behind them. These shock troops were the ancestors of the later “small unit tactics” used in World War II.

On June 8, Brusilov captured the city of Lutsk. Such was the speed of the Russian advance, the commander of Austro-Hungarian forces for the entire front almost fell into Russian hands, only just escaping ahead of the arriving troops. The Austrians were in full retreat and the Russians had taken massive amounts of prisoners. Unfortunately, the attack was so successful Brusilov was in danger of overextending his supply lines and he communicated with High Command that the continued success of the attack now lay in other units of the Russian army attacking behind him. These attacks were very slow in coming, however, and the German commanders were able to use the superior German and Austrian railroad system to rush German troops to the front.

After a period to consolidate his gains, Brusilov continued his offensive in late July and even being as short on ammo and other supplies as he was, he managed to punch all the way to the base of the Carpathian mountains where terrain, German reinforcements, and lack of supplies finally forced Brusilov to halt and dig in.

Had the other Russian commanders along the Galacian front been of the same quality as Brusilov and attacked with such innovation and vigor, the war, and history, might have turned out differently. While Brusilov’s Offensive was wildly successful, the generals to either side of him encountered much worse results leading to massive Russian casualties, a fact some historians feel led directly to Russia’s collapse and withdrawal from the war the following year.

In all, however, Brusilov’s Offensive was a remarkable piece of strategic planning and tactical execution. It was by far the most successful Russian offensive of the war and one of the most effective offensives of the war by any side on any front. In terms of casualties, the Russians inflicted 3:1 casualties during the campaign and completely broke the back of the Austro-Hungarian Army as an independent fighting force.