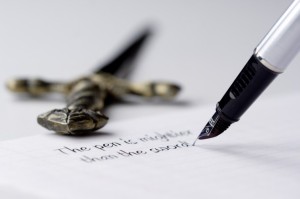 I think all females are special and should be treated respectfully and if they choose to disrespect (looking at you Miley C.) themselves, a real man should do what he can to aid them rather than prey on the tendency.  Unfortunately, one guy who lived near me my sophomore year didn’t share my high-mindedness on the subject. He was, in short, a man-whore who led a parade of coeds to his room — usually at night, but not always. Had he stopped at being garden variety man-whore, I’d probably turned the other cheek; instead, he was a cocky, braggadocio, insufferable man-whore. Anyway, if I’d let things go their course, his long-suffering roommate would probably have killed him and that would have been sad.

In late September, the roommate knocked on my door at 2 one  afternoon. As I let him in, he threw a strip of red cloth on the floor in disgust. It was the sign the man-whore used to let him know the room was, “occupied.” I looked at the roomie and realized he was nearing his limit. The sheen in his eyes told of fantasies centering on several notably violent urban legends. I told him he could crash in my room as long as he wanted. I was going to put a stop to this madness once and for all. When he questioned what methods I planned to use, I just told him the less he knew, the safer he was. He  was still there when I returned three hours later, so I cajoled him into going to supper with me. He again pressed me on what I’d done and I repeated my admonition to avoid seeking forbidden knowledge.

Two days later, I was sitting in the recliner in my dorm room around 3 PM watching Tiny Toon Adventures when my viewing pleasure was interrupted by a wail of despair which wouldn’t have been out-of-place in a production of Dante’s Inferno. It was a gripping, heartsick, bitter cry sounding thick with remorse and primal fear. Then all was quiet again. A few moments later, I answered a slight knock on the door; it was the roomie with a look of abject terror on his face and a single sheet of paper in his hand. I invited him in and he sat on the bunk, looked at me with that fearful expression, and said, “Remind me to NEVER piss you off.” I told him I was certain I had no idea what he was talking about. He gave me a “yeah, right” nod and handed me the paper.

It was a typewritten letter on infirmary letterhead — very official appearing, right down to the slightly illegible doctor’s signature stamp at the bottom. The body of the message was quite short. In its entirety it ran thusly:

A person claiming to have had unprotected coitus with you has tested positive for antibodies related to the Human Immunodeficiency Virus. As you may know, this is the virus which is the active agent in Acquired Immune Deficiency Syndrome, which is usually referred to by the acronym AIDS. This is an extremely serious matter compounded by the currently unknown incubation period of the virus and its attendant disease. At present, we simply do not know how long it takes someone exposed to the HIV agent to contract AIDS nor are we certain that such exposure inevitably results in development of the full-blown disease.

You should, of course, be tested for the HIV antibodies as soon as possible, but please note such a test may prove inconclusive at this time. The person who listed you as a partner believes their exposure was likely some three to four years ago. It will be necessary for you to be retested at a minimum of once each year for likely the next ten years or until some new development makes diagnosis more accurate. In the meantime, it is important you do not have unprotected coitus with anyone until your infectious status is determined in order to prevent further spread of the disease.

Finally, I regret to inform you that at this point there is no vaccine, no treatment, and no cure for HIV / AIDS. To this point, everyone who has developed full-blown AIDS has expired.

I  handed it back to the roomie who then stood to leave. I asked him if the poor lad had any plans after getting such a shocking letter. He said the guy had sprinted to the infirmary where they’d told him, yes, they would have sent such a letter if someone had reported any STD and wanted to “do the right thing” and alert previous partners but they couldn’t, or wouldn’t, give him specific names citing privacy concerns.

I think I grunted something non-committal like, “that’s a shame. No way of knowing who sent it then?” He shook his head as I patted him on the back and shrugged. He stared at me meaningfully before he nodded once again and went back to his room. The letter’s recipient went from man-whore to monk in moments. He finished his degree, after changing his major to microbiology from engineering. I heard he was planning on going to medical school, but I haven’t had word of him in years. Funny how things work.