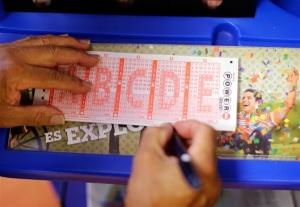 As I write this, someone, somewhere here in my beloved Palmetto State is the nouveau-est of the nouveau riche.

Someone in South Carolina purchased a PowerBall lottery ticket yesterday and for his or her trouble is now $400 million richer. Let that sink in just a minute. Yesterday morning, this person got up and maybe went to some dead-end job to give a little more sweat and time to The Man in exchange for enough of a paycheck to get by. All day long yesterday at his machine or behind her desk, this special someone was working away without the slightest idea the Long Black Freight Train of Fate was rolling down the tracks right towards him or her. For once, the light at the end of the tunnel WAS a train — metaphorically at least — and this time, that wasn’t a bad thing.

I like to picture this soon-to-no-longer-be-a-drone getting off work and starting towards home in a car or truck with broken air conditioning, four bald tires, and a drooping headliner. He sighs as he pulls out of the parking lot. She waves goodbye to the security guard at the gate. Either way, one of them turns into the late afternoon sun for a hot, sticky ride to the house. Suddenly, the headache that’s been building all day gets annoying so she pulls into a Quickie Mart clone near home to grab a Pepsi Max to wash down a few Advil in hopes of taking the edge off the pounding before facing the kiddos.

He’s a decent guy so he’s probably making some small talk with Apu behind the counter when he notices the sign stating the PowerBall jackpot is up to $400 million. He figures, “Eh, what the Hell?” and gives over a couple of dollars, fills out the ticket and heads home laughing at himself a little at the silliness of buying a lottery ticket. What would his sainted grandmother think if she could see him now?

Just as an aside, this is one of the quirks of lotto ticket buying I’ve never understood. I’ve actually heard people say, “Ah, the pot’s only at $50 million . . . I don’t even bother getting a ticket if it’s less than $200 million.” That’s crazy talk! You are standing on a sidewalk in front of a 7-11 looking like death on a stick and you’ve come to the conclusion a mere $50 million wouldn’t be worth your while? Now I read somewhere that Bill Gates would actually lose money if he stopped to pick up a $100 bill off the sidewalk. I have no idea if that’s true, but I know none of us are Bill.

Anyway, our erstwhile worker ant gets home, talks to the significant other, plays with the kids . . . whatever. Supper’s ready then the dishes get washed and he turns around to the TV just in time to catch the day’s numbers. Funny . . . those sound familiar. Not even seriously hoping for anything and certainly not expecting anything, he reaches into his pocket and pulls out his lotto stub with the numbers he chose. He takes one look at his ticket, looks back at the screen, and the next thing he knows his wife is kneeling beside him fanning him and dabbing his neck with a cool cloth. When she asks him what happened, he shows her the ticket, points to the TV, and just manages to catch her head before it hits the floor. They won. They have hit the big time.

Dude is now LOADED. He woke up in the morning wondering how he was going to stretch the money to the end of the month and he’s going to bed tonight with visions of Maserati and mansions dancing in his head.  Of course he can’t sleep. First thing this morning he called in sick to work. Dude’s tickled to death about he money, but he’s smart so he called the lawyer who helped him close on the double wide. Then he called a buddy of his who is an accountant. THEN, the three of them went down to the store to turn in that ticket.

Now here’s another thing that cracks me up. I was reading some of the comments on the stories about the winning lottery jackpot. One guy, obviously eating a bushel of sour grapes, remarked how sad it was $400 million gets taxed down to $145 million and “no one seems to care.” WHY WOULD YOU CARE!!!??? The day before, stand up weenies and saltine crackers were a gourmet lunch because this guy was one paycheck away from the poor-house and today he has $145 Million after taxes? Sure, Uncle Sam, take your chunk because I’m STILL RICH!! ONLY $145 million. That’s like saying the Star of India is ONLY a diamond or the Grand Canyon is ONLY a hole in the ground.

So this guy is set for life now, whoever and wherever he is and I’m truly happy for him. If there is any real justice in the world, he or she is a teacher with the class from Hell this year and now gets to quit if she wants to because that brings up my final funny point . . . all these people who win these millions get interviewed and say “I just don’t think I could stay home all day so I think I’ll keep on working like always.” RIIIIGHT! When I was a high school teacher I used to talk about hitting the lottery with my students and I always told them the same thing, “Folks, if you see Coach Wham on the news holding up one of those big paper checks that says ‘Lottery Winnings: $X millions’, DO NOT look for me at work the next day! I will hire my OWN substitute, but I’m going fishing!”

So here’s to you Mr. or Mrs. Lottery Winner. I hope the wealth doesn’t change you — unless of course you are a raging asshole and then hopefully it will change you for the better, and to all the dreamers who have worthless slips of paper in your pockets, all I can say is “better luck next time.”

Til then though, I love y’all — rich or poor — and remember to keep those feet clean!