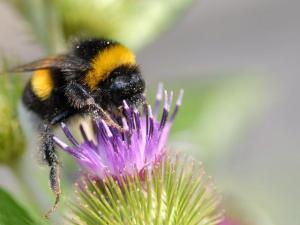 Bumblebees are my favorite insect and one of my favorite animals. I’ve always loved watching them dip and swerve around flowers, especially azaleas in the spring. Now I don’t know whether or not I believe the old saw about bumblebees supposedly not being aerodynamically capable of flying. You know the one? Supposedly some aerospace engineers did whatever it is they do and determined the bumble’s weight to wing ratio or some such meant that it wasn’t supposed to be able to fly, but since bumblebees don’t read aerospace engineering journals, they’ve never found this fact out so they fly on anyway. Maybe, maybe not. I know Ms. Mary Kay Ash believed it and that’s why a diamond encrusted bumblebee shaped pin is the most coveted award in the direct cosmetic sales empire she founded.

Whether it’s true or not is irrelevant to me. I love bumblebees because they are like me — fat, uncoordinated, and addicted to sweets.

Knowing this about me, it will come as no surprise when I saw a bumblebee barely making ripples as he drifted inexorably towards oblivion within my pool skimmer, I didn’t hesitate to reach in bare handed and scoop him out onto the deck. People will tell you bumblebees can’t sting. People would be lying. Bumbles can sting just fine when they want to, but they have a very high tolerance of idiots swatting at them so they don’t sting much. However, if you step on one in a patch of clover while cutting your grandparent’s grass in bare feet, they most certainly WILL sting and it hurts like hell.

An actual Mary Kay award bee from her museum.

Anyway, this particular bumble was in no danger of stinging me or anyone else. I was afraid I’d gotten to him too late. Of all the things about pools I hate, the indiscriminate way they slaughter innocent insects and other animals just looking for  a drink of water is highest on the list. Now, one of my favorite creatures lay probably dying as a result of a collision with one of my most hated possessions. Since it was getting dark quickly and the temperature was already falling, I realized Mr. Bumble wouldn’t make it through the night. Even if he somehow managed to keep the water out of his airways, the chill of the early spring night couple with his sodden state would surely bring the insectoid version of the Grim Reaper to claim him.

So, I did what anyone who loves bumblebees would do — scooped him up and carried him into the house directly to the bathroom. Once there, I carefully tapped him with tissue paper to try blotting off as much water as I could. I still wasn’t having much success though. The problem lay in bumblebee anatomy. If you’ve ever looked closely at most bees, you’ll see they are very hairy. This hirsuteness serves a vital purpose to the bees and the flowers they pollinate by acting as carriers for the pollen to stick to. I’ve seen bumbles emerge from some flowers looking like a big yellow cotton ball so laden with pollen were they. Unfortunately for my erstwhile patient, the same hairs were also matted and massed and holding too much water for the paper towels and tissue to soak up. I was afraid he was fading. He was moving very little, mostly just twitching a leg or an antennae every now and again. The prognosis, even to my inexpert eye, was bleak.

Then, I saw the blow dryer. My brain made the leap of logic nearly instantly. What are blow dryers FOR?! Drying hair of course! And what was wrong with my bumblebee? His HAIR was soaked! So, with no further ado, I cut the blow dryer on high heat and low wind and brought it near my patient. Of course, bumblebees possess significantly less mass than a human head, so he tumbled over instantly. I adjusted the beam of warm air but it was still too strong. Finally, I hit upon covering him with my hand and aiming the dryer on high heat / high wind right at the top of my fingers. That seemed to do the trick. The hurricane force (to a bee anyway) of the dryer stream blunted against my hand, but the life saving heat swirled around my fingers and began to have the desire effect. 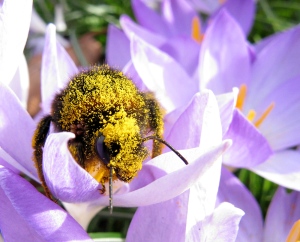 DUDE! That was some party.

When I felt him begin to stir, I moved my hand and started holding the dryer at a single spot on the towel, thus heating it significantly. He would crawl — slowly at first but with increasing vigor — over to the hot spot. Then I would move the beam away and heat another spot. We played this game for about half and hour, at the end of which he was quite dry it seemed. His hairs were still rather messy, but even my finest, smallest comb could not hope to bring any order to such a miniscule mountain of chaos.

With him now dry, I again picked him up and took him to the front porch where the last bits of daylight were shining. He sat on the railing unmoving and I thought he still might not make it. Then I hit on the idea of putting him on the azaleas that were in gorgeous full bloom right in front of the house. I eased him onto a large pink blossom and he immediately burrowed head first into the stand of stamens.

That’s where I found him — upside down and motionless — the next morning.  A strange sadness washed over me. I felt a sense of irreplaceable loss as this innocent little bee dying brought Mama’s recent death flowing back to me. I was just about ready to collapse into tears and I reached out to stroke the lifeless little legs sticking up forlornly into the air. Just as I touched one though, it quivered a bit. Heartened, I went and got a piece of tissue and pressed it against all six legs. To my everlasting joy, all six latched on to the bit of paper and I was able to lift the “resurrected” bumble from the blossom. I’m not sure what happened to him. Perhaps he was just tired from the ordeal before or maybe he drank too much azalea nectar during the night.

Whatever the case though, I placed him, tissue and all, gently between two blossoms and left him — now upright — alone to go do some cleaning. When I returned a couple of hours later, he was gone but the tissue remained and a fifteen minute search of the surrounding plants revealed no bumblebee corpses so I’m thinking the little guy made it — at least I hope he did. For all I know, he became a meal for one of the mockingbirds living in the boxwood on either side of the porch. I will choose, however, to believe he is alive and well and living out his short life enjoying the flowers and making sweet bee love to some hot little bumble sheila.

At least, I hope so. I’ve had enough of death for a while.