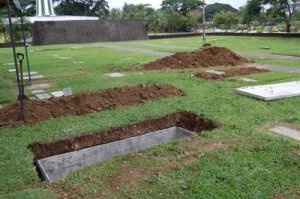 I hope everyone will forgive me for not posting very regularly this month. I’ve been somewhat distracted. Today is three since Mama died. That phrase is such a sledgehammer — Mama died . . . my mama is dead. This is not a drill; she’s not down at her house sitting in her recliner with Bitsy and Rocky on her lap and Scruffy at her feet. No. She is lying in a casket within a concrete vault beneath six feet of Carolina clay just a few inches from Papa John.

I didn’t have Mama embalmed. We buried her so quickly there was no requirement to do so and the mortician, who has helped me plan now a total of six funerals, said her skin was so thin and ravaged by years of Prednisone that embalming her would be difficult and probably wouldn’t look right. So I didn’t embalm her.

Embalming has historically served two purposes. First, it enabled people killed some distance from home to be preserved long enough to get them back home for a viewing. The other purpose is more important I think. An embalmed person is a dead person. Fear of live burial was a very real horror for humans down the years. Someone might go into a catatonic stupor only to wake up in a coffin under the earth at which point he or she would either die of a burst heart from panic or slowly suffocate.

Embalming does away with that worry because draining all the blood from a body and replacing it with a cocktail of chemicals including formaldehyde is a one hundred percent guarantee the body that goes into the grave has definitively shaken off this mortal coil.

As I said, I didn’t have Mama embalmed. As a result, I’ve woken up in a sweat a time or two over the last three weeks full of cold, boiling panic that Mama wasn’t dead and woke up in her casket after the funeral and started screaming for me to come help her, but I didn’t hear her so I didn’t go to her. I read Poe’s “The Premature Burial” in an attempt to overload the image in my mind sort of like hyperactive children are given the stimulant Ritalin to speed them up where they can slow down.

It didn’t work and that became a nightmare.

So, it’s been three weeks. On the outside, I seem to have everything together. On the inside, most days and most hours of the days, I actually am managing better than I expected to. More often than I want to admit, though, the thought “Mama is dead” will cross my mind and it will sear into my soul like a white-hot rod of iron and even though I rationally realize the pain is only in my mind, it has brought me to my knees clutching my chest more than once. Every time the pain passes, I can’t help but marvel at the fact I am still alive. If the emotions were actually to turn to physical pain, I’m certain the agony would be fatal.

No one can possibly hurt so badly and not die, and at times I have honestly thought dying would be an excellent idea if only to ease this pain wracking me down into the depths of my soul and psyche. By God’s grace, however, I haven’t died yet. I’ve sat with my head in my hands or plopped down on the floor to just sit and stare at nothing. Eventually though, the pain passes and I stand up and feebly attempt to stumble on because even though I want to lie down and give in to the grief until it kills me and I can join Mama, I cannot; I have responsibilities to others that must be seen and Mama would be disappointed in me if I shirked my duty.

I can say this though, I now understand what the samurai poem means when it says, “Death is light as a feather; duty as heavy as a mountain.”