Lately, I have taken to perusing the classified ads gathered on Craigslist.com. Yesterday, I found that the car of my dreams could be mine for $25K or the best offer. The car was a 1969 Chevelle SS 396, and it was hauntingly similar to Marilyn, the ’69 Chevelle SS 396 Daddy bought for me after I wrecked my beloved ’79 Mustang.

Like the car in Craigslist, Marilyn had a Chevy big block 396 cubic inch engine under the hood bolted to a racing transmission. I loved that car. I miss that car every day. I sold her to help pay for my last semester of college and to take care of some debts I owed. If I had it to go over with again knowing what I know now, I’d have kept the car, endured the bad credit, and dropped out of college. By now, the car would be worth more than my degree is anyway.

Marilyn looked like this only with white SS stripes on the hood and trunk lid.

Looking at that Chevelle in the classifieds then looking at the weatherman promising a week of sweltering days ahead led me back in my mind to the summer when I was 17 and had just gotten Marilyn on the road with her newly rebuilt engine. At that time, gas was hovering around $1.25 for the premium her engine required, which was good because Marilyn would

pass anything on the road but a gas station. I used to joke with my buddies that she got 60 mpg, then I dropped the engine and transmission in and the mileage went down to about 7 mpg . . . downhill . . . with a tailwind . . . and no passengers.

She was NOT an economy car, but I was a teenage boy with a job and no bills, a girlfriend, and what at that time looked like a great life full of promise ahead of me. In short, I was pretty much like every one of my guy friends. Life was good and it was summertime.

The day I remember in particular was particularly hot. I believe it was somewhere between “blast furnace” and “sunlit side of Mercury.” Unlike the complete restoration in Craigslist, however, Marilyn didn’t have one nice luxury — AIR CONDITIONING. Now, she had the vent system, controls, and spot on the firewall where an A/C unit had been when she left Detroit, but in the 20 years between that day and the one in question, the unit had disappeared. I had every intention of replacing the climate control right up until I found out doing so would cost $2000 . . . and this was around 1987, remember. On my $3 per hour stocking job at Community Cash, the likelihood of me getting that kind of lettuce together was somewhere between slim and none and slim had saddled up and left town.

Since I didn’t have the factory A/C, I made use of an aftermarket system called the 2WD70MPH model. That was short for “2 windows down going 70 miles per hour.” As long as Marilyn was moving she stayed cool. You did NOT want to be stuck in traffic though. In addition to the scorching ambient heat, it is amazing how much heat aluminum headers on a 396 ci  engine generate as they pass right under your feet. My car was HOT in more ways than one.

Due to this lack of climate control, it was my custom in those days to drive shirtless and shoeless. At the time, I could still take my shirt off without some crazy man with a peg leg and a harpoon trying to stab me while shouting “Thar she blows!” Now, did you know that in the state of South Carolina, it is illegal to drive barefooted? Guess what?

Neither did I, and thereupon hangs the rest of this story.

I was on my way to Gray Court from Laurens running about 75 up Highway 14 with my AC/DC “Back In Black” CASSETTE TAPE (!!!! remember those anybody? !!!) cranked to 11 when I passed the old fruit market in Barksdale. Did you know that stretch of road happens to be a 55 mph speed limit zone? Guess what? NEITHER DID I! However, the nice man in the grey car with the blue lights who pulled out behind me would inform me of that once all the excitement died down.

So, Smokey Bear was behind me and the road was too straight and the day too bright for me to out run him, so I pulled over, cut the Marilyn off, and waited. Trooper Douglas walked up beside my the car and said, just as I’d heard so many times before, “Son, get your license and registration and step out of the car.” Remember how I said I drove barefooted? Remember how hot that asphalt had to have been? I needed to get my canvas Nikes and put them on. Guess where they were? 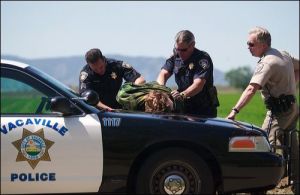 But there was just one of him. Of course, he was PLENTY.

Friends, a word of advice, should need ever arise to retrieve something from under the seat of a hot rod car in the middle of July with a very large and somewhat aggravated member of law enforcement standing beside your open window . . . tell the man (or woman) what you need and what you are about to do before you move. I didn’t say anything; I just nodded, reached down between my legs, and stuck my hand under the seat. At that point, the day got interesting.

Trooper Douglas took exception to me reaching under the seat and, being a man of action, reached through the open window, seized me under the left armpit, with ONE ARM drug me bodily through the open window, flipped me — shirtless and spreadeagled — across Marilyn’s hood, drew and thumb-cocked his .357 magnum service revolver, then placed said revolver’s muzzle right against my left temple with his hand still pressing me firmly into the sheet metal of the hood. 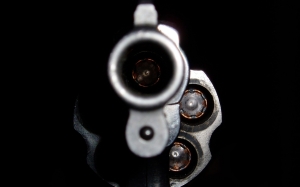 As a matter of fact, that hole DID look this big or maybe a mite bigger.

Time stood still. Somewhere off in the distance a bird sang. A lone dog barked. I heard a radio across the meadow playing Merle Haggard’s “Mama Tried”. My nose was filled with the smell of chest and thigh flesh roasting on the superheated sheet-metal of a car hood. I remember thinking, “Well, Mama, wearing clean underwear whenever I went out presupposes the underwear that was clean when I left will be clean once they examine my body.” It wasn’t.

After an eternity, Trooper Douglas spoke and his voice rolled down like Moses commanding the Red Sea to part for the Children of Israel, “Son, just what in the hell (pronounced in the Southern 2 syllable way “hay-yill”) do you think you are reaching for?”

Somehow or another, a primitive part of my brain realized my survival depended on the careful wording of my answer so I said, with somewhat of a sob, “Um, my canvas Nikes, Sir. They are under my seat and I promise they aren’t loaded; they just smell real bad.”