Right about now I should be on the last leg of my homeward trek from Orlando, Fla after completely dominating all comers in the Jeopardy! interview and tournament, thus assuring myself of a chance to show both “Watson” and one Mr. Ken Jennings just who’s the smartest one of all.

This guy who, speaking for him and his mates, once claimed to “be more famous than Jesus” once said, “Life is what happens while you’re making other plans.” That’s pretty much what happened to my Jeopardy! tryout. My Budge is still a lot dizzy, even though she has returned to work. She cannot possibly drive, nor would I even consider leaving her if she was in less than perfect health.

In the interest of complete transparency, however, I confess that she and I had decided I was not going down to Orlando anyway about three days before she had her run-in with the vertigo gremlin. I actually had emailed the contact in Orlando to let them know I wasn’t coming not too long before Budge called me to her side and proceeded to get so violently sick. Her vertigo was just proof positive to me that I wasn’t meant to be in sunny central Florida today.

The main reason I bowed out of the selection process was a simple one — money, or rather the serious lack thereof. Even before being presented with a preposterous $12,000.oo hospital bill (which will be the subject of an upcoming RANT, believe me) the fuel cost was a big roadblock to the trip. See, Disneytown is somewhere between “that’s a long ride” and “good lord, what was I thinking?” in distance from our home. We had figured it would take three tankfuls of petrol – at minimum – to make the round trip. With the current obscenely greedy speculator driven price of gas hovering around $3.50 a gallon, one tank in my beloved Element costs nigh on $50. Even my mathematically challenged brain can figure out that’s $150, and that’s just gas. By the time we tacked on a hotel room, since Budge and Mama both put the kibosh on me driving down and turning right around to come home, and food — well, it just wasn’t happening. 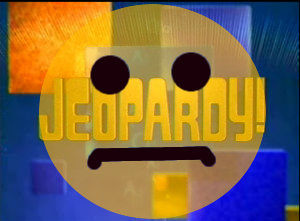 Then there’s the part about the tryout that the television executives don’t tell you when you pass the online test, but rather wait until you are all pumped about getting on the show. If I had aced the tryout and the interview (and I see no reason why I shouldn’t have) and been invited to the show, I would have been solely responsible for getting myself out to Holly-weird where — per Jeopardy! emails — I would be required to remain for five days WITH NO GUARANTEE of being on the show AT ALL.

Let me run that by you again. I’d have to get to one of the most expensive cities in California and stay for A WEEK paying for a hotel, food, and the occasional excursion to fend off hotel cabin fever to MAYBE get a shot at POSSIBLY being a contestant. So what would have happened if the five days came and went and I didn’t get on the show? I’d have to get back home — somehow.

Gentle readers, if I could afford to get out to LA for a week and come back home, I wouldn’t NEED to be on Jeopardy! because I’d have a boatload of money. I mean, have you SEEN the cost of an airline ticket from South Carolina out to the Left Coast? With the way I hear most people talk about flying, I’d probably have to go to Boston, then Rio, then back to Dallas, and finally get out to California. Apparently, no one ever pointed out to these airline people the whole “shortest distance is a straight line” thing. Oh, and all this is predicated on the fact that I could even get the nerve up to get on a plane. My widebody butt doesn’t belong on a widebody jet.

Don’t get me wrong, I’m not afraid of flying. I am, however, mortally terrified of crashing. Of course any time I bring that up, someone wants to blather on about flying being statistically safer than driving a car. That may actually be true, but I would like to point out that I personally know several people, including Budge, Mama, my brother Nick, and even myself who have survived one and sometimes more car crashes.

I don’t know anyone who fell out of the sky in a big flaming aluminum cylinder and lived to tell about it.

Even the Bible speaks warns against flying in an airplane. If it didn’t then why does Scripture say, “and Lo, I am with you always,”? Get that? LOW. Nothing about some 30,000 feet in the air. Who am I to gainsay Holy Writ?

So, I guess the world will just have to wait a while longer before I make my triumphal quiz show debut. Even though I’m certain it would have been glorious, I’ll have to rely on the thought that carried Papa Wham and I through the dismal decade of the 1980s as Atlanta Braves fans, the same thought that has sustained legions of Cubbie faithful since 1903 —

Be good to each other and keep those feet clean.