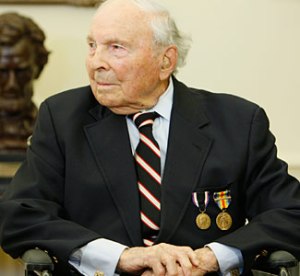 A very hale and hearty Mr. Buckles at the ripe old age of 106 at a veteran's function in Washington, DC.

For the United States of America, the guns of the Western Front have been silenced at last and an important period of US History passed from the realm of living memory yesterday evening. With the death of Mr. Frank Buckles at his home near Charles Towne, West Virginia, everyone who remembers the blood and the mud of the Western Front has left the battlefield. For our country, World War I — The Great War — that they said would “end all wars” now resides only on grainy film and yellowing newspaper pages.

I will leave Mr. Buckle’s obituary and eulogy to better writers than I can hope to be. The New York Times has an excellent write up about his life posted now. Instead, I want to speak to the passing, not of a wonderful and beloved old  warrior, but of history itself. Up until yesterday, if a thorny or ambiguous question about life in the trenches arose, a car ride to Charles Towne, West Virginia could straighten the mess out quickly once Mr. Buckles spoke five powerful words: “I know. I was there.”

Now, we only have the history books. World War I has joined the Spanish American War, the War Between the States, the Mexican War, the War of 1812, and The American Revolution as a historian’s bailiwick. The next great event in American History will most likely be the death of the last World War II veteran and at the rate those men and women — all in their 80s now — are leaving the world stage, it might not be as long. 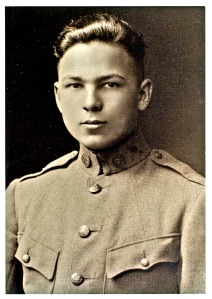 A handsome 16 year old Cpl. Frank Buckles just before his shipping out to France.

The loss of the last living figure of an event like World War I is a huge tragedy in two ways. First is the human loss. Mr. Buckles had become quite famous in his later years (and he had PLENTY of later years) and our nation is diminished by his passing. Secondly though, is the loss of the eyewitness. Now historians can “interpret” and “reinterpret” America’s involvement in that long ago global event with impunity. No one is left who can speak for the multiplied thousands who lie beneath the white crosses in Belgium’s Flanders Field.

For now, Holocaust deniers have one insurmountable obstacle to the free spread of their cancerous message and that obstacle is the every shrinking handful of men and women with numbers tattooed on their arms and horror engraved upon their souls. For now, at least, those who would say “It never happened” must answer to the likes of my beloved friend Mrs. Marion Blumenthal-Lazan who spend years of her childhood in Bergen Belsen.

For now, those who would seek to cover up the grave tragedy that was the Cambodian Killing Fields have the survivors to answer to. The aging veterans of the Japanese army must still confront the living, breathing presence of the “comfort women” whom they abused so many years ago. War Hawks who would rush to hurl nuclear weapons at one another must still look into eyes that saw a bright flash above their two cities in 1945. Some are still among us who were there to hear Dr. Martin Luther King, Jr tell a million people on the Washington, DC Mall that he had a dream.

In time, however, these memories, too, will fall silent — as silent as the grave.

In Pace Resquiescat, Corporal Buckles. May you find your rest at long last.

Love to all of you as well.