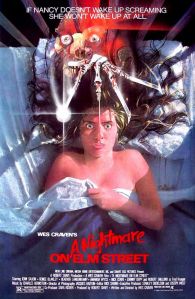 Tomorrow is the celebration of the ancient Celtic feast of Samhain. For the less pagan among us, it’s All Hallow’s Eve. Most of us folks around here just call it Halloween and it’s a time to dress up in a silly costume and eat way too much candy (if you’re a kid), dress up in a silly to slutty costume and drink way too much alcohol (if you’re a typical college student), or dress in the most comfortable things you own to walk / drive all over town so your little goblins and their friends can load up on carbohydrate laden loot (if you’re a parent).

One time-honored tradition for Halloweiners of all ages, though, is the Fright Fest Movie Marathon. That’s when normal, sane folks cut the lights out and cut the DVD player on to watch the craziest, goriest, and scariest movies available to modern man. What results is everyone trying to scare everyone else and lots of jumping and general mayhem. Most people think it’s a terrific way to spend an evening.

I am most emphatically NOT one of those people. When it comes to cinematic terror, I am the most lily-liver coward in the room. You could launch aircraft from the yellow streak down my back. I simply don’t go to or watch horror / thriller / scary / suspenseful movies unless I am tricked or forced (and by forced, I mean you’d better bring the BIG boys) into watching them. My reason is simple — I have bad nerves, Generalized Anxiety Disorder, and an overactive imagination.

In other words, I’m jumpier than a long-tailed cat in a room full of rocking chairs at the BEST of times. I don’t need any more terror in my life. This seems quite strange, I know, coming from someone who grew up with Michael, Jason, and Freddy. In some ways, my tween and teen years were the golden age of slasher flicks. All my friends ate them up.

The focus of this particular fiasco is the time I got tricked into going to the first “Nightmare on Elm Street” at the old Oaks Twin Theater in Laurens when I was around 13 or so. Now the Oaks, like a lot of theaters back then, had heavy velvet-like floor to ceiling that hung about a foot or so from the cement block walls of the building’s outside. That space was just wide enough for the theater employees to slip into and go up and down the side aisles unnoticed.

This provided ample opportunity for mischief.

Well, most everyone knows about Freddy Kruger and that stupid bladed glove of his — NOW.

I’m sitting with three other guys two rows down from the mom who brought us and I’m hunkered down as much as my tubby little frame would let me, watching the movie through my fingers and it’s barely past the opening credits. Then, as if my nerves weren’t already shot, random screams started erupting from up and down both sides of the theater. We were down front, so all the screams were behind us. I had no idea what was going on and I was scared poop-less.

I was stuck next to the wall; this turned out to be unfortunate.

At a terrifying moment where Freddy jumps out from nowhere, the curtain next to me parts and a bladed glove come slashing down towards me, followed by an arm in a stripped sweater and a grotesque, hat topped face and head. I screamed like a little girl. Thankfully for my pride, so did my compatriots.

Now, I knew deep down in my psyche that this was a theatrical stunt because things like Freddy didn’t exist, but at the time, the part of the brain tasked with relaying that information to the rest of my mind was on lunch break or something so the message didn’t get out and the more “primitive” sections of the old gray matter took over.

Now folks, I learned early on in life that white boys can’t jump and fat kids can’t run. Whenever my “fight or flight” reflex kicked in, I knew it was root hog or die. Running just meant I’d still get the wedgie and I’d be tired and sweaty in the bargain.

So this arm is coming at me and I’m screaming and my buds are screaming and the folks in the rows in front and back of us are screaming and I’ve got no where to go and nothing to do and I’m terrified and trapped.  Just so you know, a terrified fat kid backed into the corner of a movie seat is a dangerous and unpredictable thing.

I wasn’t sure if the wetness on my pants was from a sudden loss of bladder control or sudden loss of 48 ounce Big Burper slushie control. (It was the slurpee I discovered later) All I was certain of was I was going to die and I determined not to go out like the chumps on the movie screen so when the blades brushed my cheek, I reached up, latched on with both hands, and proceeded to chomp down amidships of that sweater clad arm like a mule eating corn. I swear I felt my jaws lock and my teeth touch bone. I was like Ricki-Ticki-Tavi fighting Nag the Cobra; if I was going to die, at least let me be found with my teeth sunk into my adversary.

At that point, the arm started to shake violently and another whole set of shrieks got added to the surrounding cacophony which just caused me to bite down even harder. Suddenly, the grimace on the masked face was real, actual pain. That’s when my buds started banging me on the back and trying to get me to let go because they’d realized that it was all a stunt. I guess that’s when the message relaying part of my brain decided to return from the potty and I understood what was going on. The poor guy who’d been going up and down behind the curtains scaring people was holding his arm and cussing a blue streak. We didn’t see the rest of the movie.

Just so you know, if they cut the lights on in a movie theater and the show isn’t over, that’s not a “good thing.”

That’s just one of many incidents of my bad reactions to a horror movie. Later on, maybe I’ll tell you about why I was banned (much to my relief) from the campus haunted house in college or perhaps about the time I dislocated my then-girlfriend’s shoulder during Pet Semetary.

Til then, though, Trick or Treat; love y’all and keep those feet clean!