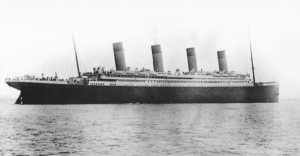 The last known picture of the "unsinkable" RMS Titanic as she left harbour for her rendezvous with fate.

At 2:20 AM, 100 years ago this morning, the RMS Titanic‘s keel broke in two just before she dove 2.3 miles down to the bottom of the North Atlantic Ocean carrying nearly 1,000 people to the Stygian depths with her. Around 500 more unfortunate souls were swept from her swiftly tilting decks into the sub-freezing waters of the North Atlantic to drown or die of hypothermia or shock within minutes of entering the water.

The disastrous sinking of the Titanic is the subject of thousands of articles, hundreds of websites, a multitude of full length books, and at least eight full length feature films . . . and that’s just in English. The individual triumphs and tragedies of surrounding the voyage are the stuff of legends and people like the ebullient buoyant “Unsinkable” Molly Brown, the craven coward J. Bruce Ismay, or tragically shortsighted Captain Edward J. Smith live on in our memories to this day — one century later.

Nothing I could write about the disaster hasn’t already been written and by much better writers than I. Still, this disaster is one which resonates with something deep inside my mind and fills me with dread and foreboding even here in my warm, dry, and safe office. In my mind’s eye, I can see, with little trouble, the chaotic terror washing over the decks of the doomed ship like the water which would carry her to her grave. Imagine what it had to be like in the lower decks where the Second Class and lower passengers were trapped and trampled in the mad rush toward the top of the ship. Think of the brave, doomed men of the boiler rooms who stayed at their posts shoveling coal into the boilers to keep the spark of the wireless dancing as long as possible.

Photo of the iceberg that sank Titanic taken by a crewman of RMS Carpathia as she collected survivors and bodies following the disaster.

Should this world stand long enough and the Almighty tarry in His return, we shall all die. That is a certainty which comforts some and terrorizes others, but it is a certainty nonetheless. Still it is one thing to be felled by a lightening strike, a car accident, or some dreadful disease, but how many of us are fated to watch helplessly — as the people aboard the doomed liner were — Death’s slow, inexorable approach? Could you stand to watch the water slowly, then not so slowly, rise up the deck as you held your child upon your shoulders in a vain effort to keep him from the water a second longer? Would you jump into the frigid, salty blackness and clutch Death to your bosom like a lover just to make an end?

The wreck of the Titanic is something which haunts my nightmares even though it occurred long before even my grandparents were born because nearly every race and social strata participated on the Titanic’s maiden voyage so it is a picture of the death of the world in miniature. The people aboard the liner were happy and looking ahead to a bright future one moment then marking the steady approach of Death the next. What if instead of an iceberg plowing into a ship it is an asteroid plowing into the Earth? Those on the ship had two hours to ponder . . . how long would we have?

It makes me think of the people trapped above the crash levels in the Twin Towers. That was another microcosm of total destruction. People who are going about their everyday lives all morning then without warning they are off to meet the One whom Bertrand Russell and Richard Dawkins bet their lives and souls is not there. Can you feel the bitter cold of the water? Can you feel the rush of the air sweeping by as you plunge from 110 stories up?

The bow of RMS Titanic as she sits at the bottom of the North Atlantic, slowly turning into powder like the dreams of those who perished aboard her.

The water isn’t the most terrifying aspect of that horrible night for me, however. The worst scenario my mind can imagine is to be one of those who likely made it alive 2.3 miles down. Of course people scoff at that idea. No one could have survived that descent could they? I remember when NASA went public with the revelation that the crew of the space shuttle Challenger actually survived the initial explosion and were alive for the seven minute plunge to the ocean where the force of impact killed them. What if someone or several someones were happily sealed inside one of the many watertight rooms aboard the ship? What if they made it to the bottom? How did they die in the inky blackness at the bottom of the ocean? Suffocation or starvation? It’s a horrible thought, but not impossible. The interior of the wreck has never been even halfway fully explored. When you are as claustrophobic and fearful of the dark as I am, such a possibility is too terrible to imagine, but not too awful to be ruled out.

In any event, the loss of 1,514 people in the black icy water of the North Atlantic 100 years ago is a tragedy almost too great to imagine, if for no other reason it was so completely avoidable at so many points, but none of that matters anymore. To this day, it is the 8th greatest loss of life in a non-military maritime disaster in recorded history. So when you think of the Titanic or, God forbid, go see the hideous 3-D adaptation of the already hideous 1997 James Cameron movie, remember the words to an old hymn and say a prayer for those await the day when the sea shall give up her dead.

Eternal Father, strong to save,
Whose arm hath bound the restless wave,
Who bidd’st the mighty ocean deep
Its own appointed limits keep;
Oh, hear us when we cry to Thee,
For those in peril on the sea!

I feel this particular picture did not fit with the tone of the rest of this post, but I must include it in any discussion where that abominable 1997 movie might come up . . .

This highlighted frame capture shows the piece of flotsam CLEARLY has enough room for Rose AND Jack if only the selfish cow had possessed the common decency to SIT UP or SKOOCH OVER!