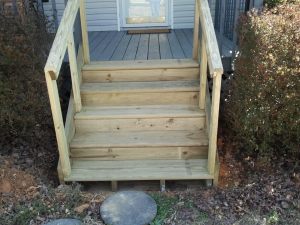 Every so often, I manage to get it right.

When Budge and I moved to our home thirteen years ago, we noticed one serious flaw — apparently, our front steps were designed and built by a hobbit with a grudge. Three steps led up to the front porch and they were six inches wide at best. The narrow treads were compounded by the angle of the steps that felt more like climbing a ladder than walking stairs.

My mom almost tripped up them the day we moved in. My beloved Budge (whose Indian name is “princess-trips-over-sunshine”) fell on them twice within the first week we lived here. I can’t number how many work days started off horribly for her with a spill down the steps. Twice, she turned her ankle during a fall badly enough to go to the ER. Last January during an icy spell, I had my feet go out from under me and hung suspended above the demon-possessed hunks of wood long enough and high enough to think about just how badly it was going to hurt once I hit.

Our steps were a comical, if deadly, conversation starter as everyone who came to our home for the first time noticed how ill-designed they were. One of our friends — young woman who is very tall and statuesque with feet of proportionate size — literally had to ascend and descend the steps sideways because enough of her foot wouldn’t fit on the tread perpendicularly to walk up or down safely. Several visitors mentioned we walk upon a death trap every day.

I was pretty much forced to agree and within a month here and falling twice, I had vowed I would rip out those horrid timbers and replace them with properly proportioned pedestrian pathways.

Then last Tuesday morning, after thirteen years of cheating death, I got a wild hair and decided RIGHT NOW was the time to fix the steps. Here is where things get intriguing. See, I’m one of those sad males who never learned the basics of carpentry from my father or my grandfathers. As a result, I never approach a project like this without anxious trepidation and the knowledge that severe personal injury is always a possibility when I handle power tools.

Now, anyone who knows carpentry can look at my work and tell which side I started on because I learn from my mistakes “on-the-fly” and tend to get better as I go. For instance, the left handrail took me three hours to do correctly. The right one took forty minutes.

Another funny think about me and building stuff is I use screws even though nails are much cheaper. See, I can squeeze the trigger of a drill and put a three-inch long deck screw where I want it, but I can’t hit a nail on the head twice in a row with a hammer if someone had a gun to my head. If my soul’s salvation depended on me hammering a nail home without bending it, I would split Hell wide open. I watch in open-mouthed awe as my daddy and others easily drive nails home with three hammer blows while my nails look like the twisty blacksmith’s toys in Cracker Barrel stores.

I also use screws for everyone’s safety, but I’m not talking about holding power or “up to code” stuff. I’m talking about unreasonably violent pain reactions. If I slip with a drill and bang my hand, when I give a primal scream and chunk the drill from my hand, it’s only going as far as the cord length. However, if I crush my fingernail with a hammer, I turn into a reasonable facsimile of Thor: God of Thunder and hurl my clawed version of Mjolnir with all my pain-assisted, adrenaline-rushed might in whatever direction I happen to be facing and endanger windows, cars, children, pets and low-flying aircraft. I figure I’m better off with screws.

With all this in mind, by sundown Tuesday, I had developed my stair plans from several WikiHow articles and a handful of YouTube videos. I had a solid plan of attack and went to Lowe’s and bought the materials with the last vestiges of our surprise tax refund.

Starting early Wednesday morning — and with a lot of digging and demolition — I managed had the “landing” level and the up and down stringers attached by lunchtime. Of course, I did have to take one stringer down and redo it after I realized I’d put it four inches too far over. Once upon a time in my life I’d have just left it and moved on thinking “good enough is good enough” but I really wanted this done right. Besides, once I realized what I’d done wrong, I’d already hung the four stringers once so redoing one wasn’t a big deal. By the time Budge got home, I had just screwed down the final tread. You cannot imagine how shocked I was when my measurements actually WORKED CORRECTLY. The top tread is smooth and level with the porch. Like the title says, even a blind squirrel can find a nut every now and then.

I didn’t want to push my luck so I knocked off for the day and started anew Thursday morning. My plan was to be finished by lunch. I managed to do that — if I were eating lunch in the Hawaiian Time Zone. I had some “design issues” with the hand rails. I couldn’t figure out how I wanted to attach them for the most strength and security. By the time I installed the first upright, I’d been sitting on the top step holding a 2×4 and sporting a dazed look for about an hour.

Still, I had the steps completed when Budge got home. I didn’t lose much blood or skin, but my back hasn’t let me forget I’m not in my 20s anymore. Ever critical of myself, I told Budge the steps looked like a complete amateur built them. She reminded me “Professionals built the Titanic; amateurs built the Ark.” She even put up a picture of them on Facebook she was so proud of me. I love my Budge.

So, if you need any steps built, please don’t call me, but remember I love y’all and keep those feet clean!