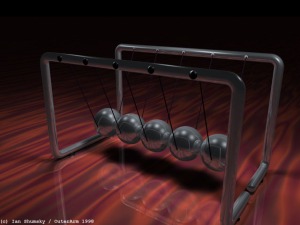 That’s a fancy description of INERTIA.

Inertia is one of the greatest enemies of the human race. You can explain about 90% or so of people’s actions if you apply the principle of inertia to psychology. Call it “maintaining the status quo” or “going along to get along” or “just floating” if you want to, but it’s all inertia.

Why does a child or a teen sit in front of a video game hour after hour? It’s inertia. The kid is in a static state and it’s the easiest thing in the world to do to just keep pushing that “start” button on the controller.

Why do people spend hours aimlessly surfing the Internet? Again, it’s inertia. To stop and do something else would require their will to be a stronger force than the draw of the Web. If you think about it, StumbleUpon and sites like it are counting on the principle of human inertia.

Why will a man work at a job he utterly despises with people he wouldn’t give the air in a jug to if they were dying? It’s a safe, known quantity. Finding another job requires exerting a force to overcome the stable — if soulkilling — station he’s in. It’s often passed off by saying “the devil you know is better than the one you don’t,” but is it really? Most people never find out unless a greater force — say massive corporate cutbacks — acts to move them.

Inertia explains why people stay in houses they’d like to move away from, relationships with people they’d like to get away from, and activities they don’t really enjoy. Changing — overcoming personal inertia — takes more force of will than most people today can muster. It’s tons easier to ride along in the ruts than it is to pull off onto a side street. Funny thing about ruts, especially deep ones, they look just like a grave with both ends knocked out.

People are fat because it takes too much willpower to overcome the inertia. Junkies stay on drugs because it’s easy to keep moving and difficult to stop. People don’t go back to school because of inertia. In most anything it’s just easier to “let nature take its course” than it is to exert any real control over our lives and I admit to being the chiefest of sinners.

As much as I love to write and as much as I like posting on this blog, it’s been over two weeks since I’ve posted anything because I missed a day and a day became a week and a week became two. It was easier to play Solitaire and keep hitting F2 than to open up WordPress and write a post. I couldn’t overcome the inertia.

I’ve heard it said that a man can get used to anything eventually, no matter how unpleasant or demeaning, because it becomes a habit and a programmed way of thinking.

“Habit” is just another word for “Inertia.”