Brenno was an exchange student from Rio de Janerio. He was a natural athlete and a fabulous kid to boot. The year he wrestled for me, he made the state quarterfinals having never seen a wrestling mat before he stepped onto ours. He was region champion and placed in every tournament we entered. As amazing a natural wrestler as he was, his real sport was futebol — what we Americans call soccer. In “The Beautiful Game”, he was phenomenal.

Now in most of South Carolina, soccer is ignored at best and denounced as communist at worst. Our program was five years old and had seen six coaches. This year, no one had volunteered to coach. Coach Candler stopped by my room one day and asked, “Wham, will you please take soccer this year?” Gentle readers, please note you could inscribe every jot and tittle of my soccer knowledge at that moment on the back of a postage stamp with wide margins all around, but Budge and I had just moved out so the bit of extra money would help. With a furtive nod, I began my year as a soccer coach.  Luckily, I had yet to meet Brenno.

I was sitting next to Brenno on the bus ride to a match when he asked, in the accent that assured him a gorgeous prom date, “Coach, You gonna coach futbol this year.”  He followed up with, “We gonna run a 3-3-4 or a 1-6-4 or what?” Brenno read my panicked, dumbfounded look and said, “Coach, you doan know a ting about futbol, do you?” I shook my head. He smiled and said, “Is okay, Coach, I din’ tink you looked like a futboler. How ’bout I put dem in de rat places, an’ you make dem roan? ‘K?” I suddenly felt a little better about spring.

First day of soccer practice, I met the team in the parking lot so we could walk together to the field. Brenno asked, “Dis where we gonna play, coach?” I laughed thinking he was having a joke at my expense.

We walked to the stadium and Brenno saw the field. We had a typical field for a 2A school with no budget for capital improvements; it was two pies and a barbed wire fence short of a cow pasture. I was looking over some drills I’d found on the ‘Net when one of the guys said, “Coach, something’s bad wrong with Brenno.” I walked over and he was teary-eyed, staring at the field as if he’d just discovered El Dorado. I put my arm around his shoulders — well, more like the middle of his back — and said, “What’s wrong, dude?” If I live to be ten centuries old, I’ll never forget how much I’d taken for granted all my life when he asked, “Coach, we gonna play on grass?” The last word came out reverently.

Brenno had never played on grass. The one grass field he knew of was used ONLY by 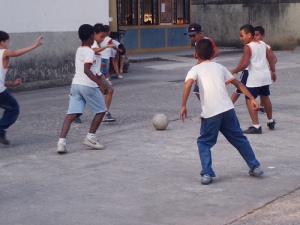 “AAA League,” — a pro league. He and his friends played on a dirt field free of stones but hard as slate. He had scars on his legs from falling while playing.

He was amazed that we had FIFTEEN perfectly round leather regulation soccer balls. He was used to kicking made up balls of tape wrapped around twine or some such concoction. I asked him what would happen if he had that bag of balls in his neighborhood. He said, “Oh, Coach, I could never keep such a treasure. My friends and I would take them to the priest to keep safe and give out when we played; our children and grandchildren would play with them.”

Brenno took that bag of treasure home with him. I told Coach C. to take it out of my pay if he had to. He didn’t, but it would have been worth it to see the look on Brenno’s face when we gave the full bag to him at the end-of-the-season banquet. We’d  had the best season in the program’s history — we only lost one more game than we won. Brenno scored every goal and was co-MVP of the conference along with a Mexican exchange student at our rival school.

As much as he taught me and the others about “futbol,” his real gift was teaching us how much we have to be thankful for and just how much we take for granted. I miss him and I hope he’s okay and still playing with those balls.

Love y’all and wash the soccer field dust off your feet! 🙂