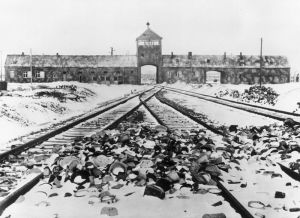 Seventy-five years ago today, Ukrainian advance elements of the Soviet Red Army reached the medieval town of Oświęcim, Poland. Now understand the Soviets had no great love for Poland or Poles, but what they found that day would jar the nerves of the most jaded infantryman or tanker. You see, for the last several years, Oświęcim had used another name. The occupying Nazi SS called the town Auschwitz — a name synonymous with horror. In all, over 1.5 millions souls would pass through Konzentrationslager Auschwitz; less than 400,000 would leave its gates alive.

Auschwitz was an “everything” camp. The first of the three main camps — Auschwitz I — was a typical Nazi concentration camp designed originally to hold Polish political prisoners swept up in the days after Germany’s invasion of Poland. Auschwitz I was utilized for slave labor. Most inmates were worked to death. The third main camp built, Auschwitz — Monowitz, was built by IG-Farben (a German chemical company still operating wide open today) to produce synthetic rubber called Buna, which is why this camp is sometimes called Auschwitz–Buna or simply Buna.

Along with IG-Farben, several other companies (many of which still operate in Germany today) built their own subcamps around the Auschwitz complex. Prisoners were herded into these satellite camps by the thousands to work themselves to death having been promised “Arbeit Macht Frei” or “Work Will Make You Free.” Unfortunately, the only freedom offered at Auschwitz was the freedom of death.

To that end, the most notorious of the Auschwitz camps was constructed. It was called Auschwitz–Birkenau and its purpose was not manufacturing nor slave labor. Birkenau was designed for one reason only — the murder of men, women, and children on nothing less than an industrial scale. Birkenau was one of the five “death camps” the Nazis built in occupied Poland to eradicate the subhumans in the Reich: homosexuals, Romani, Sinti, Soviet POWs, but especially Jews. The death camps were the Final Solution to the Jewish Question which consumed Hitler since the days he wrote Mein Kampf.

The days were simple at Auschwitz. Up before dawn, assemble in the courtyard of the dormitories, and march off to work oneself one day closer to death. At Birkenau, however, the day ran differently. All day and all night, the trains arrived. These were the infamous cattle cars that brought Jews and other undesirables from all across Nazi occupied Europe. The trains came right up to the gate of the camp and their wretched human cargo, often still clutching luggage of some pitiful kind, would pour out onto the receiving area. They would be lined up by baton wielding guards with vicious dogs and each line would walk up to a black clad SS doctor, maybe the Angel of Death himself, Josef Mengele.

This was the horrid selektion. If the doctor pointed right — LIFE! The prisoner would go to the line leading into the work camps; however, if herr doktor pointed left, well the prisoner would go into another line. The prisoners not selected to work would be taken to Birkenau and lead up to a line of shower rooms. All around them signs would admonish them to take the process seriously because lice were dangerous in the camps. Many more than could be expected to shower comfortably were pushed into the tiled rooms. As the doors were sealed behind them, they might have time to notice the scratches on the wall and ceiling, but it was too late. The Zyklon-B gas, originally developed as a pesticide, would already be flowing.

Fifteen minutes later, the doors would be opened — usually without venting the rooms — and the dead became the burden of the most miserable prisoners in the camp, the sonderkommando. These poor damned souls were responsible for pulling the dead bodies apart, loading them into carts, and taking the carts to the crematoria buildings where other of their kind would toss the bodies unceremoniously into the ovens. A black joke among these wretches was the only was out of Auschwitz was through the chimney. Human extermination on an industrial scale is what the Ukrainians found 27 January 1945. Some eyewitnesses said the ovens were still warm.

The camps were eerily empty, however. The only living prisoners were in the hospital, abandoned by the SS in their haste to leave before the Soviet army arrived. The rest of the prisoners had been rounded up one last time and marched off in their rags in the bitter cold of a Polish winter towards Germany and other camps. Their suffering was not yet completed. We will likely never have accurate numbers of those who perished on these death marches.

But Auschwitz was liberated.

When General Eisenhower and the American and British forces liberated other concentration camps farther west, the general would order war journalists into the camps by the dozens and instruct them to take as many pictures as possible of the conditions and the people they found there. One of them asked Ike why and the general replied, “One day in the future, people will say this didn’t happen; it couldn’t have happened. I want there to be proof.”

His words have proved prophetic. Holocaust denial often centers around Auschwitz. Deniers point out too few ovens to handle the massive claimed numbers. They say, “Where is the gas residue?” They have been taken to court in countries all over Europe and none have won yet. So as we celebrate this day of liberation, take the time to look around at the world today.

No one ever thought a killing machine like the Nazi regime could arise. It was the stuff of nightmares and yet since 1945 we have witnessed genocides all over the world: China, Cambodia, Latin America, the Balkans, and Rwanda just to name a few. It can happen again and it will if we stand aside and do nothing.