I originally wrote this post nine years ago back in 2010. I reread it and realized something. It’s football season, awards season, and — most aggravatingly — ELECTION season. Nothing’s changed from what I said then so I thought I’d run it again. I hope you enjoy it.

As a matter of good raising, I don’t normally discuss sex, religion, or politics in polite company. Lately, though, a trend has developed that has me frothing at the mouth and I’ve reached the point of putting my irritation into print.  Therefore, this post will be quite religious and political in places. So, if you are an atheist or you hate religion or you just don’t like reading or talking about spiritual things, here’s your warning. Hit the bricks now and if you still read to the bottom, don’t send me some comment about how “weak-minded” or “old-fashioned” I am to believe the Bible is real or that God is real or that Jesus is real. I’ll take my chances, thank you very much.

So, you’ve been warned.

If you’re still with me, know that what’s driving me nuts (well, MORE nuts) is the growing tendency of people in all forms of public endeavor to drag religion into everything. What has finally pushed my quarter off the table is the rash of comments in my local newspaper by people claiming to speak for Jesus. It’s on my last nerve and it has got to stop.

As an example of what I mean, watch any football game from high school to pro. As soon as a player makes a touchdown, he hits a knee or points to the sky in some obvious move to “give thanks” for his touchdown. 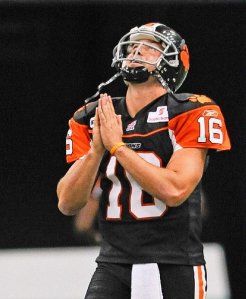 I am not a seminary educated theologian, but I am willing to bet on a few things in the theological sphere and one of those is I’m pretty certain Jesus Christ is not a football fan. Or a baseball fan. Or basketball. Or hockey. . . you get the picture.

See, for those who don’t know, Jesus and His dad, aka. God Almighty, have tasked themselves with the creation and maintenance of the universe. Now, even though being omnipotent makes this task vastly easier and probably does leave time to take in a few quarters of football here and there if They so choose, I just don’t picture Jesus being a football fanatic. Of course, the Saints DID win the Super Bowl last year, but I think that was more on God-given talent than any divine intervention.

Leave Jesus out of the scoring celebrations!

The proper order is “get award” THEN “get drunk!”

Another group that boils my innards and boils my blood over their misappropriation of the Lord’s Name is the lot of “award winners.” Oscars, Emmys, and Tonys. CMAs, AMAs, and Grammys. Stage, screen, or stereo. The medium that is the source of the awards show is irrelevant. They all have the same seriously annoying habit. As soon as they get up on stage and take their pot metal statuette or crystal resin miniature from the vapid, chattering host or hostess, the first thing many of them do is lean into the microphone and say, “I’d like to thank God for this award!”

Again I appeal to my admittedly self-taught body of Biblical knowledge and I feel very comfortable saying God probably doesn’t care that you won your silly award. After all, He and Jesus sit on thrones (well, technically Jesus is standing at God’s right hand for the moment) in a room vastly beautiful beyond our finite minds’ ability to comprehend. They are surrounded by seraphim and cherubim that do nothing 24/7/365 (366 on leap years) but sing songs more glorious than our greatest songwriter can dream of. Do you really think They stop listening to an angelic choir just to hear Lady GaGa warble out “Bad Romance?”

I’m betting against it.

One other thing before I leave the entertainment industry alone and move on to the REAL target of my derision. If, after receiving your pot metal or crystal resin, you lean into the microphone and drunkenly or doped-upedly slur your thanks to the Almighty, I wouldn’t count on that thanks reaching the ceiling. I am no longer a teetotaler where faith and alcohol come together. My thought is Jesus’ first recorded miracle was turning fetid water into fabulous wine. I don’t think He has a problem with a glass of wine or a cold beer after cutting grass in July in the South.

The whole drunken slurring thing though? Probably not so good. The Bible has several instances of people (usually men) getting drunk and the results are always disastrous and ugly. You may THINK you’re different, but I can pretty much assure you, you’re not.

Leave Jesus out of the “awards ceremonies!”

Now, before I begin blasting away at my most despised blasphemers, let me make clear that I think anyone, anywhere, anytime (let’s leave the technical theology out of it for the moment if we may) can respond to and accept the Gospel, be he a self-indulgent basketball star or be she a babbling, bacon bikini wearing songbird. I have it on good authority that one of my very best friends accepted the Gospel message halfway down a 150′ ravine during the third end over end flip of his Nissan 280ZX. One of my former students, a self-proclaimed atheist, heard Jesus’ call in a fighting hole in Afghanistan right after a Taliban bullet made a crease in his armor helmet.

Now for my true venom. The group I despise the most and the absolute WORST Jesus hijackers are POLITICIANS! I am at the point of getting nauseous whenever I hear some scheming, conniving, back-door-dealing Washington sewer dweller spout out something like “Our party won control of thus and so because God is on our side!”

This wrapping oneself in the Cross covered prayer shawl is completely bipartisan as well. Elephants and Jackasses alike invoke the name of the Lord to hopefully win the passage of some “vital” piece of legislation or, much more likely, to appeal to the “folks back home” who expect their representatives to be moral, preferably Christian, men and women.  Nowhere is this malady worse than here in my beloved Southland. We are a devout people down here. Sure, we may go out on Friday and Saturday nights each week and drink ourselves blind. We may switch from bed to bed like our heads are on fire and our butts are catching. We may swear and spit and carry on, lie, cheat, steal, etc.

But we’ll be in church come Sunday.

We expect the same from our politicians and they deliver. If I hear one more politician say “I feel this is what God would want me to do,” I may collapse into an uncontrollable conniption fit! It wouldn’t be so brazenly blasphemous and hypocritical if the politicians were not so “cafeteria” style about their so-called “heavenly mandate.” A senator can vote to increase the deficit, increase taxes, increase involvements in wars — but he’ll still get elected by a landslide as long as he claims to be staunchly against abortion! A representative can back big business, spit on the middle class, and whore-hop around Washington, DC worse than a Heidi Fleiss call-girl working on a new Ferrari, but as long as he keeps pushing a bill to get prayer back in schools, the people will support him.

535 member congregation and every single one of them is a politician! Who’d a thunk it?

So it goes on with this party claiming divine favor then that party claiming some new revelation. They’ll get up on TV with tears in their eyes as they talk about their conversion experiences in a little country church (he or she may be from Atlanta, Nashville, or Jacksonville but it’s ALWAYS a little country church) when they walked the aisle and let Jesus into their hearts.

All I know is Jesus must be pretty lonely in there since He’s the only thing in that heart.

Let’s get one thing straight and clear once and for all now and forever. Jesus Christ is not a Republican. Jesus Christ is not a Democrat. Jesus Christ is a King and not just ANY king but the King of Kings. Neither He nor His Daddy give two toots in a tornado about our petty earthly politics because They know who ACTUALLY runs this show! It doesn’t make the slightest bit of difference to Either of Them that Donald Trump defeated Hillary Clinton to become POTUS. They. Don’t. Care. They have bigger fish to fry.

So please, all you politicians posturing on a false faith or even a genuine faith that you can’t stop ramming down people’s throats, stop. STOP!

Leave Jesus out of politics.