Today is, once again, Down’s Syndrome Awareness Day. In honor of the day and the special people it recognizes, I’m reissuing this post from 3-21-2012 about one of my favorite people ever. Drew is out of high school now and I’ve lost touch completely with him but I hope wherever he is, someone is cleaning his glasses and he is happy because he was a great person and I still miss him.

I’m not at all a politically correct person . . . just ask Budge or spend ten minutes around me, but I am so glad that the term “retard” is now a sure-fire ticket to a PC beat down by anyone around with an iota of sense. One of the things I miss most about being in education is the chance to interact daily with the “special students.”I’m no fool or naive and I know these children can be difficult to deal with at times, but more often than not, they are the sweetest and kindest group of children in any school. At my last position as librarian here in the Upstate, I was blessed to have met Drew. Drew was born with Down’s Syndrome, which is medically called Trisomy 21, which further means he has THREE copies of his 21st chromosome instead of the required TWO. As a result of his genetic condition, Drew has easily recognizable features including a slightly webbed neck and a mildly enlarged, slightly protruding tongue.

Without fail, Drew would come in to the library with the rest of his class after lunch. More often than not, he was sporting a smurfy tongue and blue Kool-aid smile from nose to chin thanks to his predilection for blue raspberry slurpees from the cafeteria. The dark blue of the slurpee stains were a complement to Drew’s sparkling blue eyes behind the glasses that were forever slipping down and teetering on the end of his button nose. Instead of sliding them up his face with a knuckle to the bridge, he would grasp one of the lens and place them back on a more useful part of his face. As a result, his glasses stayed a greasy, smeary mess and I often wondered how he could see out of them at all.

Having me clean his glasses after lunch became a favorite routine of his and if anyone else tried to help him out by clearing away a layer or two of grime, Drew would stop them and say, “Mr. Wham. He clean them in a minute.” Of course, “a minute” was anywhere from immediately to the end of the day, but it didn’t matter. I cleaned his eyewear once at the beginning of the year and that was it . . . I was the windex man. 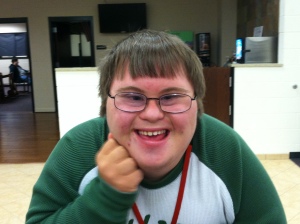 Meet my buddy, Drew. If this precious expression can’t put a smile on your face, you might not be breathing.

Now somewhere along the line, Drew had come to equate affection with sitting in one’s lap. While I’m sure this was cute and easily accomplished when he was a young fry, by the time I met him, he was about 4’6″ tall and about . . . well, 4’6″ around. He was pudgy, almost always happy, and determined to sit on my lap. Aside from being inappropriate, my poor knees wouldn’t hold him. So, after a lot of wrangling and “no Drews” and even a tear or two, we came to a compromise. He would sit cheek by jowl with me on the couch by the reading center and lean his head on my shoulder while I cleaned his glasses. It was inevitably the highlight of my day.

I miss Drew and the rest of his class. They are all in high school now. Laura works in the library there and she keeps me posted on how he and the rest are doing. So far, he’s not had many bumps in the road, but people tend to forget that he’s a boy in his late teens, Down’s Syndrome or no, and that means hormones are raging. He loves the ladies, and that’s been a matter of work this year, but he seems to be adjusting. I’m glad he’s happy because he always managed to put a smile on my face.

So today is Down’s Syndrome Awareness Day. It’s 3 – 21 – 12, which mirrors the fact that Downs causes 3 copies of chromosome 21. If you know one of these precious children, give him or her a hug for me and help them keep their feet clean.