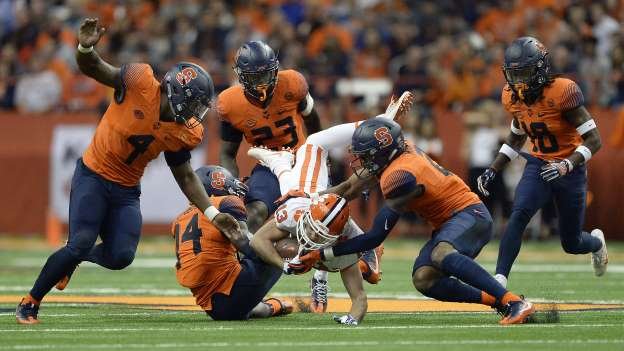 My beloved Clemson Tigers went down in ignoble defeat last night to the, supposedly, lowly Syracuse Orange by a score of 27-24. This after we started the year as the defending national champions and sporting a six win, no loss record on the season.

Now, this is a bad loss with no way to spin it at all. Well, our starting quarterback DID sustain a concussion before halftime, so there’s that, but with the defense we were supposed to have, Syracuse should have never been able to run up and down the field on us the way they did. Of course, that’s why what’s on paper matters so little in the big picture. On paper, this was a yawner by halftime.

That’s why they play the games anyway no matter what the paper says.

I feel a kindred spirit with dear Oklahoma now. It was just last week the mighty Sooners lost to the disregarded Iowa State Cyclones. OU was number three in the polls and predictably tumbled many spots down. Clemson will no doubt follow a similar freefalling path . . . as we should.

Now I’m writing about this somewhat because of how embarrassing it was to see my alma mater lose a game they should have won, but mostly, this is about college football in general. Budge and I were having a conversation over lunch today about college football fans. I know several people who are voracious Clemson fans. They go to home games and tailgate and even occasionally make a drive to a closer away game. All of them that I know have one thing in common — they all went to Clemson.

What I can’t understand no matter how hard I try is why some people are such rabid boosters of a college THEY never attended, THEIR CHILDREN never attended; in fact, no one in their FAMILY has ever attended. I know some people who are Alabama fans. Now granted, Alabama has been a number one program in the country for years so lots of people are going to jump on the bandwagon, but many of the most fervent Crimson Tide fans I know never graduated from a community college but if you ask them their “blood runs red and white, ROLL TIDE!”

My own father HATES Clemson and that’s where I WENT TO SCHOOL! You’d think that would garner the Tigers some paternal loyalty, but he is a devout fan of the USC Gamecocks who are the Tiger’s arch-rival in the lower part of the state. It kind of stings a little, to be honest.

Now I would rather have won last night since winning is generally preferable to losing, but it hasn’t really affected my day much. I did make a post on Facebook about how sad I was we were beaten by a FRUIT FLAVORED MASCOT! Other than that though, I haven’t really thought about it. Yet I know one guy I’m almost dead certain was at the game last night in New York. He probably drove up Monday and has been tailgating all week. He is a RABID Tigers fan and he never sniffed the campus. Neither did his children. I’ll bet you he is LIVID right now. His month is ruined! In the past, Clemson losing has caused him to evaluate his life choices and nearly lose his will to live.

How can people get so wrapped up in a child’s game? A scandal breaks out at one of the major schools and people seem incredulous. That’s ridiculous! When you have an entity generating the amount of revenue big time college football brings in OF COURSE you’ll have people willing to cheat to win. For some ADs and coaches it’s a matter of job security. One could be making bank on Friday and if enough of the money pumping boosters get angry, he could be looking for a U-Haul by Tuesday. It’s savage and it’s just a game.

People are just that way though. I suppose with the chaos reigning in pro football the last few weeks more people are drawn to the “simpler” college games to scream at like banshees. Why? I don’t know. I just hope Clemson gets their act together before we have to play NC State or they’re going to kill us!