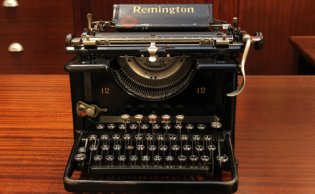 This post is somewhat out of desperation. Ever since I started this blog back in September 2008, I’ve always managed at least one post per month. Something stirred my mind yesterday and I realized today was the last day of May and I hadn’t posted anything this month! I didn’t want to break a perfect streak so I went to sleep last night thinking about what to write today. As I was drifting off, I thought I’d settle on telling y’all why I don’t publish any more writing on this blog than I do.

After all, averaging out to 1.5 posts a month over the last few years isn’t going to make me a blogger with a household name and that irritates me somewhat because I really, truly love writing. I’ve written “stuff’ for lack of a better word ever since I was in single digits. When I started this blog, I had great aspirations of publishing an increasing volume of work. Unfortunately, it hasn’t turned out quite as I planned and I thought I’d let y’all in on the three major reasons I don’t write more than I do.

First off, it’s not for lack of time. I have PLENTY of time to write. In fact, I’ve got nothing but time. Ever since I went on disability about six years ago, my days have been my own. For all intents and purposes, I’m a house husband, and honestly, not a particularly good one. I could sit and outline stories and type away for hours if I wanted to and lots of times I want to, but I’m hindered.

One great hindrance is a lack of something definite to say. Actually, I have many things I want to say, but I don’t think my audience, such as it is, would want to listen to any of them. I eschew political topics mainly because I have no patience for flame wars and any time someone writes about politics, he is immediately alienating half the people in the country and ignoring the broader world-wide audience who have no interest in our politics at all. I also am too sensitive to deal with the comments political posts generate. I don’t like be called racist or “blank”aphobic because what I believe doesn’t line up with someone else. People say the most hateful things on the internet and I just don’t want to be a part of it.

Of course, I could write about other topics than politics but the truth is I don’t KNOW much about anything worth writing about. I’m not a parent so it wouldn’t make sense for me to join the legions of mainly mommies blogging about how to raise children. History is a great love of mine, but history blogs are all over the internet and are done much better than I could manage.

When I started this blog, I was a librarian and I thought I could join other librarians in writing about my profession. Then I got fired from being a school librarian and no one wants opinions from an also ran. It’s hard to write to a profession when you no longer have a profession to write for. “Watching the Walls Close in on Me” isn’t much of a professional topic.

Another obstacle to my writing more is my desire not to hurt anyone. I’ve got a lot of stories I’d love to tell. I’ve got a lot of angst and passion I’d like to expunge from my soul and I know from reading and from my own therapist just how cathartic and helpful writing would be. Unfortunately, some things I have to say and some opinions about my own life that I hold would be painful if I spread them out on the electronic page for everyone to read. I have an aversion to people who air all their dirty laundry on social media like Facebook, and I’m afraid if I started writing about topics to make myself feel better, I’d be no better than them.

One of my favorite authors is Thomas Wolfe but I don’t want to emulate him. Once he published You Can’t Go Home Again, he really couldn’t go home again. People recognized his portrayals of them even under the veneer of fiction. Several members of his own family turned against him. He lost long time friendships. I don’t think Wolfe intended to hurt anyone with his writing, but despite his best efforts, he ended up with a conflagration of bridges. I don’t have many friends and I’m rapidly running out of family. I’d rather not get the angry calls, emails, and texts some things I want to discuss would actually bring about.

The last best reason I don’t write more, however, is actually medical, or more accurately pharmaceutical. I suffer with depression of varying severity. In an attempt to combat the depression, I take antidepressants. In point of fact, I take quite a few doses of medicine. I may as well own it because it’s a huge chunk of my life that I’m not especially proud of, but it’s part of me. Unfortunately for me, in an effort to keep one from killing one’s self, they attempt to level out emotions and maintain a nice even keel for the person suffering from depression or some other mental disorder like anxiety.

Not to put too fine a point on it, antidepressants are an emotional bulldozer. Sure, they keep the black pit of despair from being quite so dark and they manage to hold off the black dog as well. The emotional stability comes at a price though. The highs go away just as much as the lows. I don’t know of a drug, and I’ve taken a few both legal and not so much, that is as euphoric as a manic state. When you are manic, the world is your oyster. Your mind works at a frantic pace and your creativity explodes. Of course, you also tend to engage in extremely reckless behavior and spend money you don’t have, but oh the EMOTIONAL HIGH!

Well, antidepressants take that all away. You give up the euphoria to keep the depression quiet. You become a nice, docile person, but everything about your personality takes a hit. For me, I can SEE the stories and essays I want to write down in the bottom of the well of my creativity, but I can’t bring them up to the page. It is little wonder so many great writers had mental issues. Imagine if Ernest Hemingway had taken anti-depressants. He probably wouldn’t have been led to blow his head off, but at the same time, would the world have The Sun Also Rises or The Old Man and the Sea? Obviously the people who love us would rather have us here and mostly healthy and damn the writing; I only wish they could understand how to be a writer and not able to write is a high price to pay.

So that’s why I don’t write more than I do. I’m trying to find some exercises to help me get broken out of this long, drawn out funk I’ve been in as far as my creativity so maybe I’ll end up writing more somewhere down the line. If I ever want to get those books written, I have to get going soon.

In the meantime, love y’all and keep those feet clean!