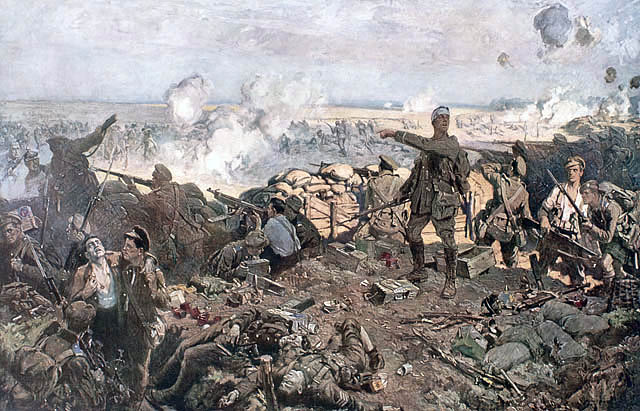 Painting of the Second Battle of Ypres, 1915

In many ways, 1915 is the redheaded stepchild of the Great War. It’s not that nothing happened during the year; a great many spectacular things took place such as the introduction of poison gas onto the battlefield, a ramping up of war in the air, and the perfection of trench warfare. It was also the year of several great battles, but none of them have yet attained the historical cachet awarded to other clashes.

This was the year the armies settled into the bloody, futile routine of trench warfare. No-man’s Land became a byword and propaganda fulled the fires of hatred between the British Tommies, German Fritzes, and Ottoman Johnny Turks. Most notably, when Christmas 1915 arrived, no one tried to meet in the middle of the wasteland between trenches for a friendly game of football. The war rolled on as usual; it was a time of tremendous bloodshed.

1915 saw Loos, Artois, Champagne, and 2nd Ypres become bloody battlefields on the Western Front while the East saw slaughter in the Caucasus Mountains and the historic Great Retreat of the Russians. The Ottoman Empire joined the war and Churchill convinced the Entente Powers to launch the monumentally disastrous Gallipoli Campaign which helped draw world attention away from the tragedy of the Armenian Genocide the Ottomans were perpetrating at the same time.

Italy joined the war when the Entente finally convinced her she would gain more in an Entente victory than if she threw in with the Central Powers. Shortly after her entry the First Battle of the Isonzo River made that alpine stream run red. Before 1915 ended, Italy and Austria-Hungary would fight the Second, Third, and Fourth Battles of the Isonzo and before the Armistice ended the War, these two enemies would fight SIX MORE battles up and down that river valley where trenches could only be dug with dynamite and rock shrapnel mixed with steel to increase the deadliness of any bombardment.

In the air, German Ace Max Immelmann began writing the book on aerial combat and though he would die in a hail of bullets and a flaming crash, his Immelmann Turn would outlive him and be the great legacy of the lonely Eagle of Lille. It was also in 1915 the Fokker Scourge utilizing the Fokker Eindecker single wing aircraft would drive the Entente pilots from the skies in droves and for a time, Germany held complete sway over the air.

On the seas, Germany unleashed her U-boats and they proved greatly effective so long as they refused to abide by standard rules of naval warfare and alert the ship they intended to sink. This “unrestricted” submarine warfare eventually lead to the sinking of the famous Lusitania British liner with the loss of over 100 American lives and very nearly brought America into the war three years before she would eventually join.

Other than the U-boats, however, the sea was generally a quiet place. Some commerce raiding took place on both sides, but the British Home Fleet and the German High Seas Fleet would both remain in port watching and waiting for some great encounter.

So 1915 was far from uneventful, but the actions of the year remain largely footnotes in the history of World War One not because they were unimportant, but because all the battles of 1915 paled in comparison to what was to come in 1916 — the year contemporary writers called “The Breaker of Nations.” 1916 would see the main great naval battle finally take place at Jutland, but most of all, it would be ruled by two words: Verdun and Somme.

This is the last Great War Wednesday post of the year. I’ll pick back up in January or early February to look at the events of 1916. Until then, have a great new year and keep your feet clean.