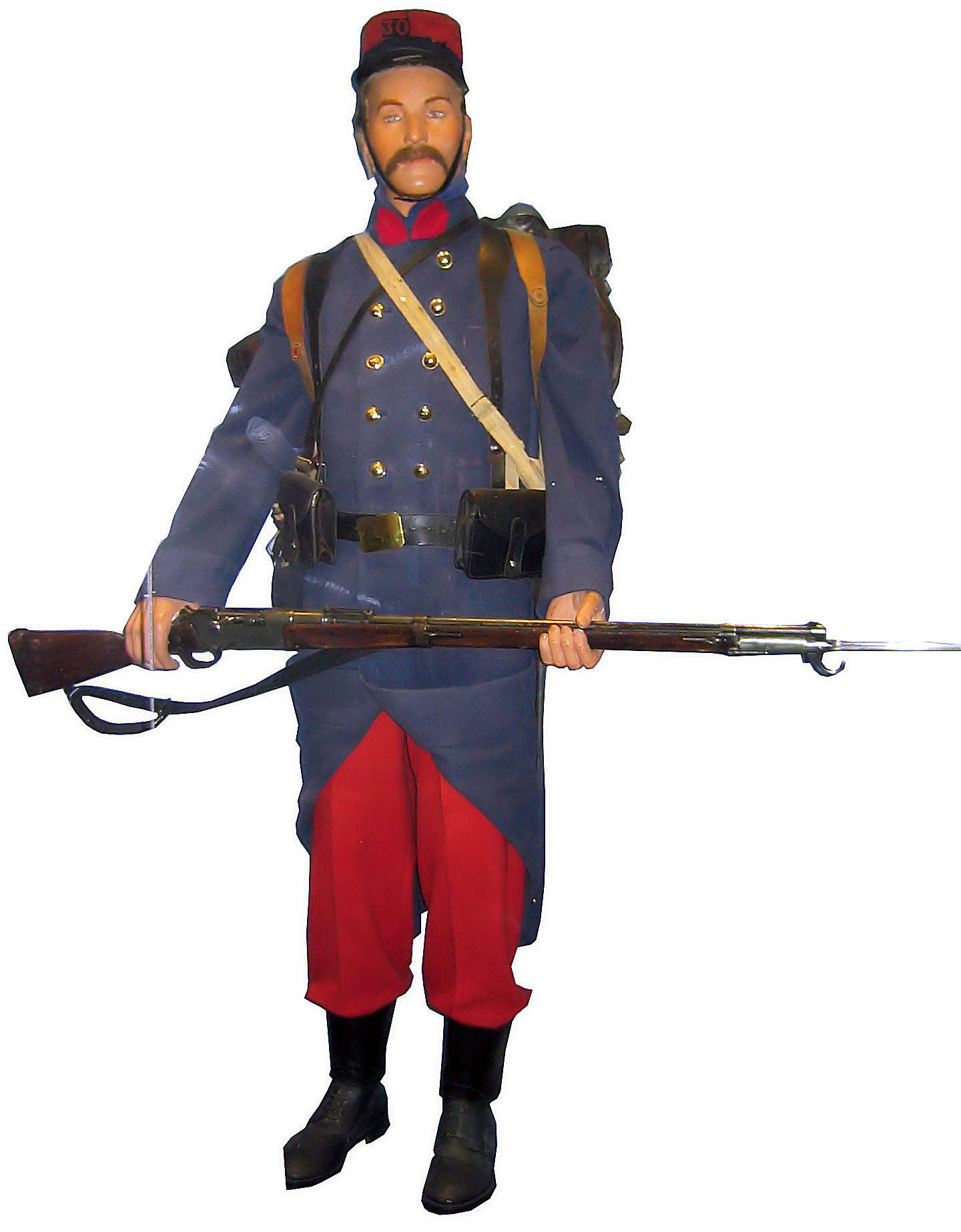 It’s a safe bet to say no one was ready for World War I. The last time Europe erupted in a continent-wide conflagration, a Corsican artillery corporal was the one who lit the flame. One hundred years of relative peace saw great progress in weapons technology, but other areas lagged conspicuously far behind. Nowhere on the battlefield was the state of general unpreparedness more obvious than the uniforms all the combatants marched off to war clothed in.

The French cavalry famously wore uniforms almost indistinguishable from those Napoleon’s famous cuirassiers had worn on the field at Waterloo. The French also fielded several of their Zouaves regiments still wearing their distinctive brilliant red flowing pantaloons in 1914 and 1915.

For their part, the British had learned from the Zulu Wars and the two Boer Wars how foolish their traditional bright red coats were on even a semi-modern battlefield. As a result of heavy casualties in those engagements, especially to officers, they wisely marched off to the Western Front wearing khaki colored kits. Unfortunately, while khaki is a marvelous camouflage in the Transvaal of Africa, it sticks out like a duck in a hen coop on the green fields of Flanders.

Brightly colored uniforms aside, all the combatants shared one flaw in their strategy for protecting their soldiers — no one wore helmets. Helmets or “helms” had once been the crowning piece of any worthy soldier’s kit. Knights of course wore elaborate face-encompassing tubs of metal, but even the lowliest archer or pikeman would have some sort of iron or at least boiled leather pot to guard his pate.

Unfortunately, the advent of gunpowder spelled the doom of the helmet. Commanders reasoned, quite logically, that any helm capable of stopping a bullet would prove entirely too heavy and cumbersome for soldiers to wear with any regularity. As a result, the substantial protective headgear gave way to more elaborately colored and beplumed “shakos” which enabled generals to keep track of their troops in the smoke and fog of battle. For 200 years, the helmet, if it was worn at all, was a ceremonial headpiece at best. So things stood at the outset of the Great War as the French marched off in their traditional white wool “kepis” while the Brits wore soft flannel field caps into the early battles.

By the middle of 1915, however, trench warfare had set in in earnest and officers began noticing a new type of injury causing great casualties among the men. Whenever the massive field guns’ shells exploded near the lines, they would fling great plumes of rock, soil, and shrapnel into the air — often to great heights. As men like Galileo and Newton proved throughout the centuries, what went up was going to come down . . . HARD. A man might not be harmed in the least by the blast from a Bertha, but the fist sized rock she kicked up falling from a quarter of a mile high onto his cute little kepi would do a number on the old brain pan. Helmets started making a rapid comeback.

The Germans were at the forefront of helmet development having been the only power to enter the war with some semblance of one already — the iconic “pickelhaub” with its prominent central spike. The spiked helm was more for looks, however, so the Germans began development on a three piece forged helmet with a modest visor and a defined skirt at the back protecting the wearer’s neck. This became the famous “stahlhelm” which would serve with distinction throughout the Great War and later be a symbol of the Nazi regime during World War 2.

A “B” pattern Brodie helmet.

Across the Channel, the British developed the Brodie Helmet which became the stereotypical look of the British infantry “Tommies” during the War. The Brodie, unlike the stahlhelm was stamped from a single piece of steel instead of being meticulous fitted together. As a result, the Brodie could be turned out in much greater numbers at a greater rate enabling the British Expeditionary Force to be fully fitted out with helmets before any other army.

The Brodie was a practical design which hearkened back to medieval yeomen’s helmets. It was a shallow dome covering the head and sported a wide brim all the way round designed to shield the neck and face from falling debris in the trenches. The first production Brodie helmets had a bit larger brim than the later standard models, but High Command realized through early trials that the wider brim made it difficult for the men to aim their weapons from a prone, or lying down, position. The Brodie would later become the standard helmet for America’s doughboys and dogfaces upon the United State’s entry into the war.

Other countries adopted their own versions — with modifications — of the stahlhelm and the Brodie depending on which side they were fighting. The French drug their feet the longest and it was actually the middle of 1916 before they exchanged their useless kepis for their version of the Brodie called the Adrian helmet which had a bit narrower brim but a more rounded cup over the head.

As soon as helmets started appearing in the trenches commanders noticed casualties from falling debris began to decline. In 1914 – middle 1915, the most common fatal injury was from falling projectiles. Once helmets appeared in sizable numbers, those injuries declined by two thirds and fatalities by around half.Of course, like their late medieval forebears, none of the helmets would stop a bullet, but such was not in their design. Instead, they kept the rocks and mound of dirt the guns kicked up from cracking the skulls of the men ducking down in the trenches.

One thing both sides had in common was that, while all of the helmets produced sported chinstraps, they were universally removed, tucked up, strapped over the top of the helm, and basically placed anywhere but fastened securely below one’s chin. The reason for this reluctance to wear one’s helmet fastened with its chinstrap has its roots in battlefield apocrypha. Apparently, someone at sometime, maybe he was English or perhaps Hungarian possibly even Russian, but whoever he was, he saw a comrade decapitated by a shell blast because the overpressure of the blast caught the helmet — securely fastened by the chinstrap — and ripped it from the poor soul’s head taking said head along with it. Something no one seems to ever question is the fact that any shell landing close enough to decapitate a helmet and chinstrap wearing soldier is probably going to be close enough that the helmet is just an afterthought.