Any mention of The Blitz generally conjures up images of He111s and Ju88s dropping loads of bombs night after night out of a searchlight-crossed sky as the hardy residents of London sheltered, but not cowered, in the Tubes of the Underground and other “bombproofs” in the dark, uncertain days of 1940 and the Battle of Britain.

Similarly, question nearly anyone about Zeppelins and, if one gets any answer at all, it will contain a reference to one of two things, either the hard rocking Led Zeppelin led by Plant and Page or, if they are more historically minded, the ill fated Nazi passenger airship Hindenburg which famously erupted into an inferno over a New Jersey airfield in 1937.

However, during the Great War, Germany, in an effort to launch some sort of offensive to break the stalemate of the Western Front, began experimenting with the rudiments of what we call today strategic bombing. Beginning as early as January 1915, the ponderous steel-framed hydrogen filled products of Herr Von Zeppelin’s genius and factories glided silently across the English Channel under cover of darkness to drop some unexpected explosive surprises on the unwitting population of Britain.

After several aborted attempts, a successful raid finally launched on 19 January 1915. Two Zeppelins slipped across the Channel bound towards England and guided mostly by the glow of the city in the distance. Reaching what they deemed to be their targets, they dropped their small payload of bombs and turned back towards home. While four people were killed and 16 injured in this first raid, it highlighted what would plague the bombing campaign throughout the war.  First, several earlier raids had been forced to abort because of weather. High winds at altitude would render the earlier airships almost unmanageable and a strong headwind could lengthen the outbound trip long enough for the Zeppelin to lose cover of darkness and woe betided any poor Zeppelin crew caught out in daylight.

Any storms in the region would also cause a mission to abort. These airships floated on hydrogen gas bladders. As anyone who has ever seen footage of the Hindenburg explosion can attest to, hydrogen is wildly flammable. Even scarier, a pure hydrogen flame is invisible! If an incendiary round punched into a Zeppelin gas bladder, the resulting fire would be unseen until it reached the skin of the ship and cloth with rubberizing began to burn. More than the bullets, however, the crews feared lightning. A direct strike could, and did, ignite the volatile suspendent and send the crew to a flaming, crashing demise.

Another weakness the crews detected early on was the total inaccuracy of their bombing. At night, most brilliantly lit cities looked alike. As a result, it was not at all unusual for bombs to drop miles off target. Whereas in World War 2, any attack on London was likelier than not to actually hit London, some Zeppelins attacked “London” only to discover later their bombs had fallen on the city of Hull a mere 154 MILES away. Furthermore, all the bombing crews aimed at a “target” in the largest possible sense of the word. Bombs either dropped from crudely fashioned racks below the gondola or else were hurled out the windows by the crew. Neither method came near to anything one might consider precision. The deadly iron hail fell where it would and often where it eventually landed had no connection with the military whatsoever. 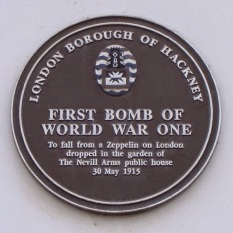 The very first bomb dropped on London by Zeppelin landed in a flower garden. The tendency for bombs to go off target led to mostly civilian casualties. Even though these deaths were unintended, the term collateral damage had yet to be invented. British press made propagandizing hay with every non-combatant’s death. Londoners referred to the giant airships as “baby-killers.”

Ironically, the bombings proved so inaccurate Kaiser Wilhelm refused to allow the Army or Navy air arms to target London for months after the raids began. After all, he had several beloved cousins and other family living in London . . . most of them at Buckingham Palace . . . and he didn’t want to risk them being harmed.

While people on the ground obviously feared the Zeppelins, the German crews who flew and maintained the beasts didn’t exactly live the life of Riley either. The airships had around a twenty man crew who, like the later submariners, were all volunteers, and who, again like their brethren under the sea, suffered much greater casualties. Over 40% of the aircrews perished during the course of the war.

Fully half of the crew was devoted to maintaining and repairing — often mid flight — the four or six giant engines of the craft. This job had its perks, first among them being the warmth of the engines. These craft were flying at altitudes where the temperature was a balmy -20F even in the summer so a sustained heat source was a true pleasure. This boon came at a cost, however. The engines were atrociously loud and during each flight, the engine compartment quickly filled with a noxious mixture of fuel fumes and exhaust. The other crew members such as the officers, defensive gunners, and radiomen had a much quieter ride, but the mountain of garments they were obliged to wear made them look for all the world like Randy, Ralphie’s young brother in A Christmas Story. Regardless of where a man was on the craft, however, the fears gripping their hearts were the same — crashing, enemy bullets, getting lost, but most of all burning to death in a tangle of cloth and metal hurtling earthward. Being a Zeppelin crew member was not a job for those faint of heart.

While Zeppelin raids went on right up until the Armistice in 1918, they must be deemed a colossal strategic failure. In the course of the war, airships made 51 bombing raids on England. These killed 557 and injured another 1,358 people. More than 5,000 bombs fell on towns across Britain, causing £1.5 million in damage. 84 airships took part, of which 30 were lost, either shot down or lost in accidents with an accompanying death of over 600 men.

In the end, and quite ironically, probably the worst damage the Zeppelin raids would do would come during the Second World War. The German High Command greatly overestimated the psychological effect the bombing of civilian centers would have on Great Britain. In their turn, the Allies would adopt the same philosophy as the Germans and as a result, civilian casualties in World War 2 dwarfed those of World War I as each side tried valiantly to “bomb them back to the stone age.” Unfortunately, in an all out war scenario, governments — even the vaunted democracies, much less the totalitarian states — aren’t great at listening to their populations. In a real sense, the feeble and largely unsuccessful Zeppelin raids of World War I sowed the seeds which led directly to the atrocities of the Blitz, Dresden, Tokyo and other failed attempts by the powers to bomb each other out of World War 2.