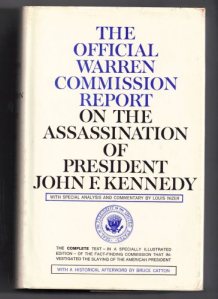 I concur, but I wish I didn’t.

President John F. Kennedy was assassinated fifty years ago today as he wrote in a convertible limousine through Dealy Plaza in Dallas, Texas. The imagery of that fateful fall day are forever etched in the minds of Americans of that generation. Several times as I was growing up, Mama told me the story of being eleven years old in gym class at Gray Court – Owings School when the principal came over the PA system and asked teachers to get their classes seated and quiet for a very important announcement. She said several of the teachers cried and many of the older students did as well. Mama always said she didn’t think about the President much, but she was very concerned for “Mrs. Jackie” and her well-being.

Ten months and 889 pages after the events in Dallas turned America upside down, The President’s Commission on the Assassination of President Kennedy told the public Lee Harvey Oswald had acted alone in killing Kennedy and Jack Ruby had acted alone in killing Oswald. Never in the course of human events has such a document caused so much furor. The Warren Report has been vilified and vindicated; it has been pooh-poohed and propped up, but it has never ceased being controversial.

For better or worse, a significant portion of Americans, and the world at large as well, believe the Warren Committee got it wrong. My generation grew up hearing conspiracy theories abound implicating everyone from LBJ to aliens in killing the President and framing Oswald. Try to read all the books, articles, and web pages on the assassination and you will never finish. As far as I’m concerned, however, the committee was correct, but my opinion doesn’t give me much comfort. In fact, I think Oswald acting alone is much scarier than any grand conspiracy.

Lee Harvey Oswald was a complete nobody with strange political ideals and odd habits. He wasn’t on any FBI or CIA radar because he was just a nobody . . . but with three shots from a cheap Italian rifle, he changed the world. THAT is scary. See, a big conspiracy would be comforting for me. Smart people run conspiracies and dangerous organizations. The world has agencies who can protect us from a group of boogeymen; sooner or later, someone will talk to the wrong person and the group will be broken up and we’ll all be safe again.

Locating and limiting a loner loser like Lee, however, takes nothing less than lots of luck. That is terrifying.

“Lone wolfs” are the most dangerous of all terrorists and criminals. They report to no one; they are in league with no one; they are, quite simply, alone with their thoughts of murder and mayhem, and that makes them supremely dangerous. As a people, we don’t like the thought of such dangerous people walking around among us. It’s unsettling to realize that one person — a “shadow person” at that — can rip the fabric of a nation into tatters and change the way we live in our day to day world. It’s better, safer at least, to believe only big organizations with heads and resources and charts and data can pull off something like a Presidential assassination. Big particles get caught in a sieve quickly, but the tiny singletons pass right through.

Oswald wasn’t the first person to act alone and change the world and he hasn’t been the last. Look at Charles Whitman, the University of Texas Sniper. Nothing about him suggested he was anything other than a mild, hard working veteran, student and husband . . . until the day he murdered his mother and wife then climbed into the clock tower on the UT campus in Austin and shot fifty people, killing seventeen.

With just a minimum of help from a couple of friends, Timothy McVeigh carried out the deadliest act of domestic terrorism in the country’s history when he blew up the Murrah Federal Building in Oklahoma City and killed 168 men, women, and children. During his trial, McVeigh made a statement I think sums up what I’m trying to get across. People speculated McVeigh had co-conspirators and pressured him to name them before he exploded saying

You can’t handle the truth! Because the truth is, I blew up the Murrah Building and isn’t it kind of scary that one man could wreak this kind of hell?

Isn’t it scary indeed? Time and again in our history, one person with an attitude, a vendetta, or just a chip on his shoulder has carried out an act so heinous it has altered the way we conduct our lives. Thanks to Oswald, Presidents are vastly less accessible than they once were. No one ever heard of crime in Norway, much less mass murder, but one violent true believer in “antizionism” changed that when Anders Behring Breivik bombed several government buildings in Oslo before donning a police uniform and traveling to an island full of teenagers at summer camp and shot and killed 69 of them. Mehmet Ali Agca swore allegiance to no particular group but still decided to shoot and very nearly kill Pope John Paul II. That act gave the world The Popemobile, but imagine if Agca’s bullet had pierced the pontiff’s heart.

Finally, do any of you parents feel as safe sending your children to school as you felt when you were going to school? Lone, disturbed, and disaffected people have made school a terrifying place. From the Columbine Massacre to the latest mass murder at Sandy Hook Elementary almost a year ago now, we have to worry that some person with a beef and a gun is going to break into our schools and kill our children.

I understand people want to see conspiracies, but in Kennedy’s case, I think Oswald acted alone, like so many others before and since, which proves to me no well thought and planned conspiracy is nearly as terrifying as the twisted human nature of a lone killer.