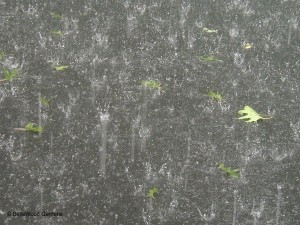 NOT what you want to see at the beach.

Anyway, the week wasn’t off to the greatest start with having to wrestle down and hogtie a skeeved out stoner so I figured it had to get better. Day 2 — rain, and lots of it. This wasn’t a passing shower to cool things down for ten minutes then raise the humidity out the roof. This was what Papa Wham called, “a good soaking rain,” which is great if you are growing corn or some such crop, but it sucks all the life out of a beach trip.

The most immediate danger was just being in the room all together. Too much testosterone confined in too small a space is trouble enough, but add in copious amounts of alcohol and you have the Balkans right before World War I — everyone wants to fight and fight badly, but honor demanded an excuse. “Borrowing beer” was always a great excuse, and two or three times things came to blows in the room over someone taking more than his share of the libations from the fridge or cooler. Luckily, everyone was slightly too drunk to either cause any real physical damage or to feel much of the damage that resulted from the few haymakers that managed to land on the odd jaw or nose.

It’s at this point I need to interject some background about my place in all this mess. While most everyone else was binge drinking to make a sailor proud, I was limiting myself to nursing a couple of Jack and Cokes. Truth be told, I wasn’t a very big drinker throughout high school. The prospect of having to face Mama with liquor on my breath was a buzzkiller every time so I was a pretty light drinker. I would sip a little at parties but I preferred to stay mostly clearheaded and alert enough to talk to anyone in a uniform who happened to show up at the most inopportune moments. Don’t worry though, when I got to college, I quickly made up for lost time.

In the early afternoon of the rain-soaked second day, several of the guys got word their various girlfriends had arrived “in country.” Most of the girls had waited an extra day to come to First Week, ostensibly because it took that much longer for them to pack their suitcases and then get all the suitcases into the 54′ U-Haul trailer to bring the stuff down. Most of us guys had two — maybe three — pairs of shorts, a handful of t-shirts, some swimming trunks, and some type of footwear. I packed everything I needed for the week in one backpack and had plenty of room to spare.

In any event, the arrival of the females of the species meant we wouldn’t see quite a few of the guys anymore that week. For one thing, the girls always stayed in much nicer hotels — the kind with running water and real sheets. Also, just to be honest, several of the guys were giddy at the prospect of finally getting what had been promised, for some since freshman year. I leave the details to the gentle reader’s imagination. Suffice it to say, with no parents around to walk in at the worst possible moments, many couples were, in the words of poet Robert Herrick, “Gather[ing] ye rosebuds while ye may.”

Not all my lusty boon companions had perforce waited for the arrival of some maiden fair, however. Several of the guys were at the beach specifically to hunt for foreign eyes, ruby lips and shapely hips, and when you grow up in the booming metropolis of Greater Laurens County, “foreign” is any out-of-state plates — even if the state was Georgia or North Carolina. The siren call of girls strange to them was irresistible and several ended up in whirlwind Beach Week romances. Unfortunately for some of them, their souvenir of the week was a little more than a scrapbook but thankfully nothing Ajax couldn’t get off. They were lucky. In 1989 in the backwaters of South Carolina, we had heard of AIDS, but it was still just a boogeyman, not a real threat, or so we thought. I found out different in college, yet another story for another time.

For my part, senior year had “put me off my feed” insofar as females went. I broke up with the first great love of my life late  junior year in pursuit of greener pastures. By October senior year I realized the pastures were only greener because they sat over septic tanks, so I worked hard to get us back together. For awhile — a few weeks right around Christmas — it seemed we were an item again. Then in late January she disappeared for two weeks and all her dad (who absolutely hated me) would say was, “she’s at her momma’s in Georgia.”

She came back on a Thursday  just after third nine weeks ended and met me at my locker after school with no fanfare, no “hello”, “how are you”, “kiss my ass” or anything; she just handed me my class ring. The last thing she ever said to me was, “Dean (to this day she is the only person who used my middle name), I’ve got some good news for you and some bad news.” Normally, when someone tells you that, you get to choose which you wish to hear first but in her case she just continued on with, “The good news is — IT’S NOT YOURS — I guess you can figure the bad news out for yourself.” Then she turned and walked out of my life forever and I made an exception to my usual “light drinking rule” for a few days. I made a very interesting discovery during those drunkenly hazy days too — when you are drunker than Cooter Brown, you don’t notice the tandem-axle dump truck load of emotional pain life heaps on you day after day nearly so much. Thus began a long period of self-medicating a clinical depression and personality disorder I didn’t even know I had. Anybody see an eminent train wreck in this locality?

Anyway, twenty-five years on, she’s a mother of three, and grandmother of three more (I’ve discovered all too often Facebook has a way of giving you news you aren’t looking for and don’t really want) and I’m in the midst of a good life with the third and greatest love of my life. My Budge has stayed with me through episodes that would have sent any of my former ex-girlfriends running in terror so it seems all things worked together for the good.

Sorry that I still haven’t finished the story of Senior Week. Actually, I haven’t even gotten to some of the rougher moments. Still, it’s enough for now.

Love y’all, and keep those feet clean . . . unless it’s sand between your toes.