As I face my first Mother’s Day without Mama, I thought I’d tell y’all one of my favorite stories ever about me and Mama. I have been known to embellish my tales, but this one is the absolute truth.

I was sixteen and as a byproduct of such a sage and wizened age, I knew everything about everything and if you didn’t believe me, all you had to do was ask. Mama was 34 — a year younger than my Budge is right now. We were living in “The Little Barn,” which was our name for the 1960-something vintage trailer we called home for several years. It pretty much was a barn, no central heat . . . no heat at all in the back of the house where my room was . . . and no central air, just a window unit mounted in the wall in the living room. The carpet was hand-me-down from my aunt after she’d changed rugs at her place. It was a sight for sore eyes and it rocked like a sailboat in a hurricane when the wind blew, but it was home. 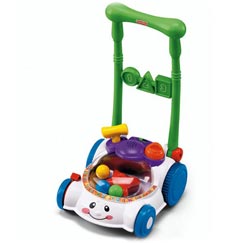 Anyway, this particular day was a Thursday right around this time of year. I remember it well because the grass needed to be cut and that was my job. I never particularly looked forward to cutting our grass because my instrument for mowing our 3/4 acre lot was a 19 inch bladed push mower and it was decidedly not self-propelled. This was also in the days before wonder drugs like Claritin, Zyrtec, and Allegra had been invented. I’ve chronicled my battle with hay fever before in these pages so I won’t go into great detail now, but suffice it to say by the time I finished cutting all that volunteer fescue with my Fisher-Price toy lawnmower, I could either endure the rest of the day sneezing and itching or take two Benadryl capsules and slip into a coma. But I digress.

It was a Thursday and I had three things propelling me towards my doom: my new ’79 Mustang, a newly upgraded drivers license, and daylight. A few years later at Clemson University, weekends always started on Thursdays, but a young man tearing out the door after supper on what was still a school night then was severely frowned upon in Mama’s household.

I had one hand on the doorknob with visions of picking up Robby and just wandering around the countryside telling lies, going a little too fast around curves, listening to loud music, and hoping to catch a glimpse of that elusive creature — the beautiful teenage girl. Mama was washing the dishes from supper and at that moment, she was cleaning out the 12″ cast iron frying pan (or skillet to you yankees among my limited readership) she’d used to fry my favorite breaded okra with earlier in the evening. She had just placed that hunk of pig iron on the stove eye where it lived when she noticed me still in “school clothes” and fixing to walk out the door. She turned back to the sink and as she did, she asked me a question — a simple question really — that would change my estimation of Mama for the rest of my life. She said, “Son, where are you going?”

I could have answered with any number of phrases, the absolute truth being best, that I was going to get Robby, put a few hard Community Cash earned dollars worth of gas in the car and drive around wasting time and daylight. That’s all I had to say and the evening would have simply progressed on. Unfortunately, I was sixteen and a boy. I also possessed one of the smartest mouths in three counties and I had a delightful talent for opening it at the wrong time and letting it say the wrong thing. Tonight, my smart mouth shoved my much less bulky good sense out of the way and blurted one word, “OUT!”

Mama paused in her dishwashing and visibly tensed, but she almost immediately went back to the suds in the sink and her back asked me a second innocuous question, “Okay, and when do you plan on being back?” Once I let my mouth off its rather long chain, it had a tendency to overdo things so I missed the chance to have a pleasant evening when I replied with yet another one word answer, “LATER!”

Again, Mama tensed up. I learned later on that weekend that I had just used the same intonation, phrasing, and even voice patterns my Daddy used when he and Mama were dating and later on when they were still married and he was off to do some mischief. Mama HATED that “Out; Later” nonsense coming from Daddy. She didn’t like it any better coming from me, but what happened next is what sealed my fate. She had again started washing the dishes and softly, without turning around, she said, “That’s funny, son. Now really, where are you going and when do you plan on being back? It’s a school night.”

Gentle reader, have you ever had an out of body experience where you have seemed to stand beside yourself as you did something unbelievably stupid and your astral self is screaming at your physical self “Danger, Will Robinson! Danger, Will Robinson!” But your physical self just plowed right on through that big red mental STOP sign up ahead? Well, that’s how I felt when I spoke next.

I was sixteen and basically grown — in my own eyes — and I had a car Daddy had bought me so Mama had no business telling ME — A MAN — where to go, do, and be back. As Daddy had famously told her himself on more than one occasion “No damn woman is going to tell me what to do.” So, I spoke again and very nearly paid for my words with my life when I said, loudly with all the confidence of a teenage boy who feels ten feet tall and bulletproof, “IT’S NONE OF YOUR (horrible expletive I’d never used in front of Mama deleted) BUSINESS WHERE I’M GOING OR WHEN (second horrible never used in Mama’s presence expletive deleted) I PLAN TO BE BACK! I’M A GROWN MAN!” 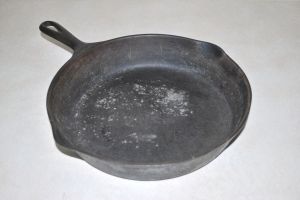 In the right hands, deadly weapon.

As God whom I serve is my witness, I didn’t know that little woman could move that fast. In one smooth, swift motion, she pivoted on her left foot, snatched up that cast iron frying pan in her right hand, and stepped and threw a sidearm cookware fastball that would have made Kent Tekulve blush with shame it was so perfect. I never saw it coming until it was too late to do anything about it. That heavy hunk of iron spun a few times between me and Mama and — mercifully — struck me right in the solar plexus with the lip instead of the handle. If the pan had rotated another half turn, we wouldn’t be having this conversation because I’d have been skewered by an iron handle.

The force of the blow staggered me backwards and I caught my knees on the arm of the sofa, lost my balance, and sprawled backwards, arms flailing, to land flat on my back after cracking my skull on the coffee table on the way down. As I lay there in a dazed stupor with my head and chest throbbing in my feet still twitching in the air on the sofa cushion like a mosquito on a date with DDT, I heard the refrigerator door open, something get removed, and footsteps coming towards me. Before I could clear my head at all, Mama slung the contents of the ice water pitcher all over my face and upper body, causing me to sit up and split my forehead on the bottom of the coffee table as I rose.

As I sat spluttering and breathless, Mama put her face millimeters away from mine, which was good because my eyes were having trouble focusing, and said very quietly and carefully, “You will never speak to me in that manner again; do you understand?” I could only nod my most vehement, impassioned assent. Then she said, “When you get your breath back, you get up, change clothes, and go cut the grass, yes?”

My pride was soaked and my head and chest were pained but that skinny bundle of good sense had whipped and hog-tied my smart mouth for a change so all I could croak was, “Yes, ma’am,” as Mama nodded and walked off.

I love her still and God knows I miss her.

Love y’all as well, keep those feet clean, and as you honor or remember your own mothers this Sunday, if you’d say a prayer for me, I’d certainly appreciate it.