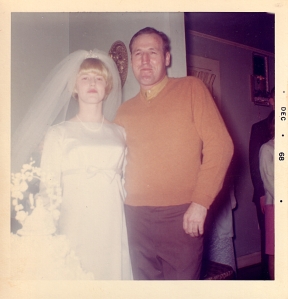 I’ve found it exceptionally difficult to look out the window all day today and see such a beautiful cerulean sky with the Sun shining warm and high.

Five years ago on this day, rain fell so hard and so long that it made a rivulet beneath the funeral tent where I stood giving Papa John’s eulogy. It rained so hard the canvas of the tent sounded almost like a ten roof. I couldn’t see the highway only twenty yards away.

When the time came to leave, Budge and I drove out of the cemetery and I couldn’t think of the words or tune of a single hymn or gospel song. All I could think about were the words to Stevie Ray Vaughn’s signature song . . . “The Sky Is Crying.”

As unbelievable as it was to me, my Papa John – Mama’s father – was gone and it seemed as if Nature herself was taking part in our grief.

It’s taken me five years to write one word about Papa’s death because all these years later, that wound is no less open, raw and putrescent than it was the day Papa John passed away.

I didn’t get to spend nearly as much time with Papa John as I did Granny and Papa Wham for a variety of reasons I will not discuss here. However, of all my close ancestors, I share more traits and characteristics with Papa John than I do any other relative. Some people who read this might not like that. The person writing this doesn’t really care if they do or not.

My Papa John was special. He faced down more calamity and disaster; overcame more ill will and hard breaks; and fought off more despair and personal demons than any man I’ve ever known. Whenever I think of Papa, I think of the quote some attribute to Rabelais “What cannot be remedied must be endured“. My Papa John endured where others would have fainted, if not fled in terror at what was happening to them. Death alone could stop him and even then, he didn’t go without a fight.

Papa worked hard, but he never had anything to show for it. I’ve seen him give the coat off his back to someone who needed it more than he did. He was big-hearted and generous and kind and the world hated him for it. He was slandered and lied about and run through the petty small town rumor mill over and over — because he was good to people.

Throughout all the false accusations and tribulations in his life, my Papa never lifted a finger against anyone. He didn’t have to. God had Papa’s back. Oh, I know a lot of you reading this, especially members of my own family probably don’t believe that, but again, ask me if I care. You weren’t there. You don’t know as much as you think you do. What I know is everyone — man and woman, kin and stranger alike — who mistreated my Papa John either had to come to him to apologize on bended knee or else died in horrible, Old Testament ways. One wagging tongue silenced itself with a blast from a 12 gauge shotgun. Another died choking while drowning on his own blood. A family member who spoke too harshly about things which weren’t her business one too many times died of a horrible wasting lung cancer . . . and never smoked a day in her life.

Believe what you want to.

From the time I was 13 until I was 35 and he passed, Papa had MULTIPLE strokes and heart attacks. I was with him the night he had his first stroke in our church parking lot. I was 13 and didn’t know what the change in his voice meant and neither did he. The ailments took his body, but Papa never succumbed to the slightest bit of dementia. Until he lapsed into his final coma, he was as sharp as the kitchen knives he used to keep to cut radiator hoses.

For years before he passed away, his left hand and arm were completely useless. He drove his car with a steering knob. His left leg was halt and somewhat withered. He walked anyway.He never stopped. He endured.

I could fill a book with my papa’s life, but most people — even many who knew him — wouldn’t believe parts of it. He was a mystery to most people. I don’t have space or time to talk about cars and restaurants and the Harakin Pine Woods. I could make an entry about Papa in this blog every day for the rest of my life and the half wouldn’t be told.

Papa John didn’t measure success in dollars and cents. That confused lots of people. People might not have known how to take Papa, but they knew who to turn to for help. He never stopped his ministry. When he could no longer stand in a pulpit, he’d sit in a Waffle House at 3:00 AM talking to a stranger about God over a cup of coffee. Five years later, Mama and I are still finding out about lives he touched that we knew nothing about.

Here’s what matters though and here’s what you need to take away from this post about my grandfather. He didn’t have a bank account. He never owned a house. His only possessions were his bible, a few clothes, and a hand-me-down Ford Fairmont. The day he died, he had one $5 bill in his wallet. As I said at his funeral, according to our vision of “The American Dream” he had NOTHING to show for his life. Some people might have looked at him as a complete failure.

I’ll tell you what he did have though — in the middle of a driving rainstorm that would turn to sleet later that day — he had more people at his funeral than the Fletcher’s Mortuary tent could hold, but the people came anyway and stood in that driving rain to pay a last visit to a man who had a heart no one could measure.

THAT is what you need to know about Papa John. That and the fact that I loved him more than breath and since his death nothing has been the same and never will be. Men like Papa John leave a hole too big to ever fill on this side of the Jordan River.

Rest on the mountain for a little while, Papa, and look for me . . . I’m trying.