Of all the holidays in the year, I like The Fourth of July least of all — even less than September 19th, which is Talk Like a Pirate Day. (That might not seem like much of a holiday, but if you’ve ever taught 3-5 in elementary school, you know the deal.)

It is safe to say that I absolutely LOATHE and DESPISE this overblown monstrosity of a midsummer excuse for a day off.

If someone ever decided to take Dickens’ novel A Christmas Carol and set it in America on the Fourth of July, I would HAPPILY play Ebenezer Scrooge and hand out copious amounts of humbugs to anyone who would listen. I suppose instead of the Ghosts of Christmas Past, Present, and Future, I would be assaulted and browbeaten by the Ghosts of Edward Rutledge, Button Gwinnett, and John Penn!

Humbug, I say! Bring them on. 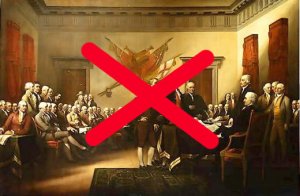 Ooohhh, John! I bet King George will be REALLY impressed with your big ol' signature!

Now I hope no one mistakes my lack of devotion to this insanity called July 4th for a lack of patriotism. I adore what the Fourth of July stands for . . . I just hate the celebrations surrounding it AND I think we celebrate the COMPLETELY WRONG DAY. If we’re going to call something Independence Day, then July 4th is ludicrous. A bunch of rich white men — about half of whom never picked up a musket in the Revolution — signed a big piece of parchment in a blazing hot hall in Philadelphia.

Signing the “Declaration of Independence” didn’t a bit more make this country free than me signing a million dollar record deal makes me able to sing. As a matter of fact, had things gone differently in just a mere handful of battles, skirmishes, and alliances, we’d still be members of the Commonwealth of Nations, if not the United Kingdom, and the Fourth of July would be another November 5th style Bonfire Night in the streets of London. The only difference would be the great drunken unwashed masses would burn Washington in effigy instead of Guy Fawkes. Read about what the Crown authorities did to HIM when they caught him and you’ll see just what would have awaited Jefferson, Franklin, and Co. if the French hadn’t taken pity on us (yes, there actually WAS a time when the Frogs could fight instead of retreat).

Who knows, maybe V would have worn a George Washington mask in the comics instead of a Fawkes visage. 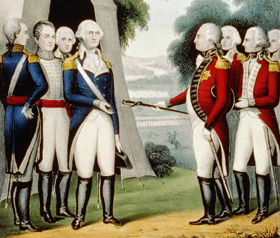 Why yes, Mr. Cornwallis, sir, I believe we upstart rabble DID kick y'all's pompous British @$$es! (GW was from Virginia and therefore a Southerner and would have used y'all)

No, if we’re going to properly celebrate something, let’s celebrate October 19th!! THAT was our REAL independence day because THAT was the day an unruly mass of shopkeepers, merchants, tradesmen, and yeomen farmers (with a little — okay, a LOT of — help from the aforementioned French)  beat the most powerful army of the most powerful nation on Earth at a little place called Yorktown.  (Jeez, how can we owe the FRENCH our freedom of all people? The ignominy of it all.) THAT’S when we were free! Think about it — the US Navy has never named a ship the U.S.S. Declaration of Independence, now have they? On the other hand, at least TWO very important aircraft carriers — one of which is a floating museum about 200 miles from where I’m sitting — have been named U.S.S. Yorktown.

However, bad history isn’t the MAIN reason I despise the Fourth of July. No, I hate the Fourth of July for two much more obvious and realistic reasons. First, I am FAT and FAIR-SKINNED. Neither of those conditions makes for a great deal of enjoyment on a holiday that falls in the HOTTEST month of the year AND where everything — barbeques, the beach, the lake, etc — that people want to do is OUTSIDE.

Haven’t any of these Sol-worshipping lunatics heard about the Atmospheric Ozone Hole or Global Warming? Oh, that’s right, the GOP has control of part of Congress right now so Global Warming is a myth for another election cycle.

It’s CRAZY HOT OUTSIDE! How much fun can you have with sweat pooling in your nether regions?! I think not much, and have you ever SEEN what goes into most lakes? All that treated sewage water has to go somewhere. That’s another good reason for celebrating Yorktown instead of Liberty Hall — it’d be a WHOLE LOT COOLER!!

The REAL, MAIN reason for my loathing the Fourth of July, however, is simple. I. Hate. Firecrackers. I hate them with a passion the Bloods reserve for the Crips, the passion Red Sox fans reserve for Yankees fans, the passion Cleveland reserves for LeChoke. But you get the point.

I don’t mind the professional displays put on by people with the appropriate credentials to be dealing with high explosives. They are actually very pretty and if I can go to one and get a spot not surrounded by Rhode Island’s population squeezed onto a football field, I’ll gladly go.

No, I hate Roman candles, Black Cat firecrackers, and MOST OF ALL, bottle rockets. I hope a special circle of Hell awaits the Chinese fool who invented bottle rockets. Bottle rockets should be placed on the UN list of weapons of mass destruction. You might think that’s funny and a little overdramatic — but then you aren’t a TOAD! Think about it.

By far, though, the worst part of bottle rocketry comes from the “backyard artillery specialists” who have such great fun 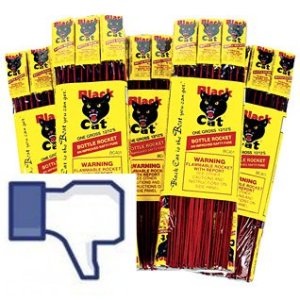 “shooting them off!” Personally, I think it’s a compensation thing, but what do I know. All I know is the bombardment starts a good week before the Fourth with just a few random pops, but come the night of “Independence Day” all Hell breaks loose in an all out aerial attack that terrifies my dog, sets many small brushfires, and keeps me awake in fear of my roof becoming a conflagration. It seems to me that the legislature should pass some sort of law that requires people who buy and set off these black powder menaces to at least have a minimum of three teeth. As another safety feature, the “firecrackers” should have some sort of audio amplified microphone that renders the explosive charges inert if the words “Hey y’all, watch this,” OR “Somebody whol’ my beer ‘n hand me that ‘ar lighter.”

We are talking about people (and I use that word loosely) who are not only willing, but delight in putting the stick of a bottle rocket in their anus and lighting it so their butt cheeks sear in the escaping flame and gift us with Eau de Fried Redneck.

Here’s an idea, Bubba; put the bottle rocket on THE OTHER SIDE. Maybe it’ll cook your genetic material and save us from your offspring. Imagine that. Bottle rocket as tool of natural selection — who’d have thought?

Well, all y’all who insist on roasting yourselves, have a good day today, wash your feet tonight, and remember that even if y’all drive me insane, ol’ G.S. Feet still loves you!

Til next time, have a good one!