Most of us have watched a young Robert De Niro playing cab driver Travis Bickle posing in the mirror with a gun and an attitude while repeating over and over, “You talkin’ to me?” It’s a great scene but it’s just one more way in which we realize dear Travis is a bean or two short of a full bowl of chili.

Now, yesterday, I was walking around in the Garden Tools section of Lowes — or as I like to describe it, Toy R Us for males — when this guy down the aisle a bit from me starts flailing his arms around and screaming and he’s looking dead at me. Unfortunately, or maybe fortunately, this was not my first rodeo with babbling lunatics involved. I taught high school and middle school — I’m ready for anything. So, I stopped and adopted a good defensive posture to let dude know I wasn’t backing down from his craziness. Oh, and I also reached over and picked up a nice double-faced axe just in case I had to get all Gimli from Lord of the Rings on Rainman here. Luckily (for both of us since nothing adds pounds like “jumpsuit orange”) before I could yell out a cool dwarven war cry and get in touch with my Viko-Celtic roots, the guy turned and I saw it — he had a freaking BLUETOOTH MICROPHONE IN HIS EAR.

This idiotic phenomenon has become a pox, nay a plague, a veritable pestilence on the good graces of our public spaces

these days. One can hardly walk around a mall or even a park without coming upon someone babbling incoherently to himself about picking up the milk and cat food or laughing maniacally to herself while continually repeating, “I KNOW, right?” Just about the time we get ready to pull our wives and children close and sprint to the other side of the aisle / sidewalk / track, etc, the goober turns around to reveal the blue blinking light practically embedded in his or her ear.

They have been assimilated.

No, really, watch somebody sporting a Jawbone and tell me she doesn’t look like she forgot to take off some makeup props before she left the Star Trek set where she was trying out for the part of Seven of Nine in the upcoming Broadway release “Star Trek: The Musical”. (They aren’t really making that play . . . at least I don’t think they are but with this Spiderman fiasco, who knows. But I digress). All over the highways and supermarkets of America, people are turning into Borg. I refuse to believe resistance is futile!

Now I admit, I hate cell phones on general principle. I am of the ilk who believe if someone isn’t home when you call, he or she doesn’t want to talk to you right then. Were it not for Budge and Mama’s dual insistence, I wouldn’t have one of the wretched, brain rotting devices. Cell phones are the final straw that is going to usher the barbarians through the gates. 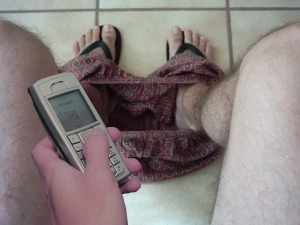 When the day has arrived that I cannot rid myself of the dregs of a two bean burritos lunch in Target without hearing a tinny version of MC Hammer’s “Can’t Touch This” coming from the next stall — followed by some fool saying “Hello?”, we are truly on the downhill slide of the slippery slope. You are pooping you fool, you need to concentrate and so do the rest of us!! Besides, do you really want to consider the environment you are placing near your hands, mouth, and ears?

Then we have the drivers barreling down the road yakking away into their “hands free device.” Apparently, hands free has become a euphemism for “wreckage inducing contraption.” You are theoretically controlling a huge hunk of steel, aluminum, glass and rubber down a stretch of autobahn at well over the posted speed limits, so you need to be concentrating on the predicament at hand, not arguing with your mother over a stupid bunch of bananas she wanted to leave you but you had no need for! For the love of all that’s holy, just TAKE THE BANANAS and HANG UP THE PHONE!

Yes, Brethren and Sistren, the ubiquitous Bluetooth in the ear is the ultimate sign the apocalypse is upon us. Not long ago, if you sat animatedly jabbering to yourself complete with hand waving and hair tugging, the nice kind men in the white coats would come and gently take you to a softly lit comfortable room with lots of padding on the walls where you could wait while being fitted for your cute jacket with the sleeves that tie in the back.

Not anymore. The rabid Bluetooth invasion has made it impossible to tell the disturbed from the merely obnoxious. Just last week, I was having a date night with Budge and watched a man and woman sit two tables across from us, both carrying on extremely animated conversations — just not with each other. All the while, that cute little blue light kept pulsing around both their temples.

Really? You can’t take that ear funk coated spit stained hunk of Bakelite out of your face long enough to talk over a meal to the person IN FRONT OF YOU? 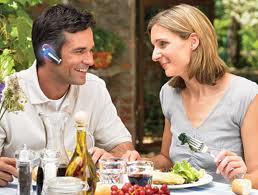 Why, YES, as a matter of fact I AM a raging douchebag!

We are all doomed.

If I owned a restaurant, I’d have a Faraday Cage built into the walls of the building. It’s not that I’m a Luddite or something. I love technology. I just hate that rules of decent behavior and civility haven’t kept pace with the times!

So, in closing, I love y’all, but if you are walking or driving around talking to yourself because of a little chip in your ear, I’m going to make fun of you, laugh at you, and think you are a goober — especially if you cut me off in traffic because you aren’t paying attention!

Til then, keep those feet clean and those Blueteeth put away!