Way back in the mists of time, I mentioned an idea I had for a random series of observations about small town life. I wrote the prologue to the set and haven’t done much in the way of fleshing it out ever since. Lately though, the original idea has come back into fashion in my brain so this’ll be the first of what hopefully becomes several installments.

The first denizen of every small town in America is the “Clark Griswold Wannabe.”

For those deprived enough to have never seen National Lampoon’s Christmas Vacation, Clark spends a goodly chunk of the movie working on his home’s light display. He staples, ties, and otherwise attaches several thousand itty-bitty lights all over the house . . . only to have it fizzle the first time he calls the family out to see the fruit of his labor.

Clark (and Mr. Stewart) would be so proud.

In your town and mine, he is “that guy” on the block, across the street, or down the road who wants the biggest, most over the top Christmas light extravaganza around. This guy puts out so many lights that birds don’t roost for a mile radius around his house because of the glow. You can read a newspaper by the lights of the blow up Santa Claus. Heaven help us all if more than one Griswold wannabe lives on the same street or block. By the time they finish one-upping each other, the rest of the town will be under rolling blackouts just to meet the power demand. Not to mention the traffic that’ll back up as everyone stops to “look at the pretty lights!”

When I was growing up, Granny and Papa Wham would take me out to Stewart’s Lake every year to see Mr. Stewart’s light display. It was breathtaking for an eight year old. We’d go every year, sometimes even twice or three times. He was in the Golden Strip Tribune Times one year and we found out just what a sacrifice his light show was. Remember this was in the early 1980s and his power bill from Black Friday to New Year’s Eve was over $700. Still, Mr. Stewart didn’t charge a dime to ride or walk around his property and view the lights. He just had a donation box set up where good-hearted souls could contribute to maintaining the Christmas cheer.

This is one of the displays from the "other" side of town. Maybe that's the house Uncle Eddie lost?

Of course, Mr. Stewart’s light displays were pretty and always in good taste. Not all the Griswolds out there are so . . . cultured. Elegantly lit Nativity scenes are replaced by fake reindeer strung up as if being skinned for Christmas dinner. The effect on young children was obviously the therapy inducing kind. Nothing like seeing an effigy of Rudolph strung up on a pole leading the little ones to believe Santa will have no one to pull his sleigh this Christmas.

Mr. Stewart passed away right after I went off to college. His children were much Scroogier than their father so his beloved displays were parted out and sold off in yard sales and at jockey lots. These days, the over the top light display capital of these parts is The Turkey Ring in beautiful downtown Pelzer, SC. Pelzer is a dying mill town and The Turkey Ring is a road that runs around and through one of the old mill hills. The people there go all out putting up displays that rival any professional shows. By far, the strangest — some would say creepiest — part of the Turkey Ring is the family of “Light People” who live in the last house on display. They all wear strands of lights wrapped around them and plugged in to drop cords. It’s a little disconcerting the first time you see it. 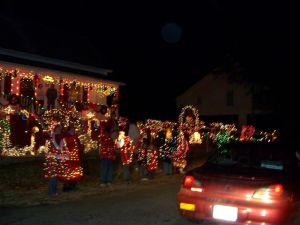 It's a little blurry, but yes, those are people wrapped in strands of Christmas lights! They even stand out in the RAIN!

Every small town has one or two of these characters though. They make the holidays a LOT brighter — literally — with their overabundance of electrical cheer. What about your town? Who always goes the whole hog to put on a show come Christmas? Tell us all about it in the comments.

Love y’all and until next time, keep warm and dry and wash your feet!