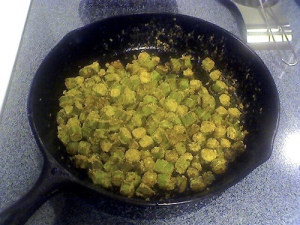 When Budge and I first married, we lived with Mama and Rob for a while until we got on our feet a little better financially. Budge helped Mama with the housework and laundry, but Mama did all the cooking just because . . . well, just because, I guess.

Anyway, one weekend about six months into our nuptials, Mama and Rob went to visit Grandma Lowe for the Lowe Family Reunion up in the hills of North Carolina. Since we had the house to ourselves, Budge decided she’d make us dinner. She’d cooked a few things for me before and they hadn’t be half bad. Tonight, she planned to pull out all the stops. She knew my favorite side item in the world was breaded, fried okra, so she obviously planned for that to be prominent on the menu. It was here that things got interesting.

Now, as a side note, my Budge is a wonderful wife. God knows she’s a whole lot more than I deserve and I am deeply appreciative of her. One issue she had early in our marriage, however, was putting way too much pressure on herself to be a modern day June Cleaver complete with pearl necklace and apron. She liked things to be perfect. Unfortunately, Budge never had much hands on experience cooking. Her mother passed away suddenly when Budge was 15 and she just hadn’t had time to learn much about the culinary arts. The second factor adding to this tense situation was the fact that Budge had only seen Mama cook fried okra for me and Mama always fried her okra in Granny’s cast iron skillet.

Now from that sharp intake of breath, I see that y’all, at least the cooks out there, realize what’s going on. In this day of non-stick, space age polymer pots and pans, a cast iron skillet has mostly been relegated to baking corn bread. The reason for this demotion is simple — it’s hard as crap to cook in a cast iron skillet! Budge did not know this.

So, blissful in her ignorance of cast iron cookery, she filled the pan about a third of the way with Wesson oil and waited. Once the oil started smoking and looked about to catch fire, she dumped the bag of Southern Home frozen okra into the pan. I didn’t know Budge knew some of the words that came out of her mouth when some of the hot oil spit out onto her arms and bare feet. If you wonder what I was doing at this time, I was sitting at the kitchen table watching intently and keeping my mouth shut like any intelligent new husband watching his wife cook.

Time passed. Budge watched the okra for several minutes with no discernible results, so she decided it would be safe to prepare other parts of the meal, just like she’d seen Mama do. Now, for the laypeople out there, here is a VERY important fact — the interval of time between “perfectly golden and delicious” fried okra and “blackened pea gravel” fried okra in a cast iron skillet is about three tenths of a second. Those three tenths of a second passed as Budge was pouring up the glasses of tea. I knew something was amiss by the way Budge looked at the frying pan when she crossed back to it.

I couldn’t see her face, but I thought I caught wind of a slight “sniff” as she carried the pan of okra to the sink to strain the oil off it. As she used Mama’s aluminum colander, I heard the unmistakable sound of river rock being ground in a coffee grinder. Still, how bad could it be? She set the rest of the meal on the table and it all looked extremely tasty. I fixed my plate then asked, “Baby, where is the okra?” She didn’t answer, but sighed heavily and brought over the bowl.

You know those lava rocks some people use as mulch around their flower beds and trees? Think harder and smaller. The bowl was half full of what can only be described as jet black ball bearings with bits of blackened cornmeal mournfully hanging on to them. I glanced up at my bride’s stricken face where her eyes were just beginning to tear up and did what any self respecting husband would do in such a situation. I poured the entire contents of the bowl onto my plate and began eating.

Under her watchful eyes, I ate the entire bowl of food formerly known as fried okra. It was crunchy. Ever ate charcoal flavored Grape-Nuts without milk? Make no mistake, it was charcoal. I could have drunk a liter of pure strychnine mixed with dioxin and the amount of charcoal in my stomach would have neutralized it instantly with no need for pumping or antidotes.

It was worth every bit though to see the tears vanish from Budge’s eyes as I declared the okra “quite tasty”. We both knew the truth, but that’s what you do when you love someone. You make allowances. Mama later explained to Budge with a smile just how hard cast iron cooking was and introduced her to The Fry Daddy. Budge makes very good deep fried okra. I’ll have to tell you about her peanut butter pie later though!

Keep your feet clean and remember who loves you!