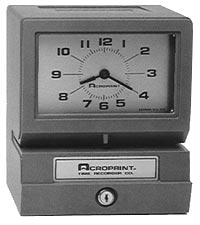 We fell back last night and took back our hour of sleep that was so rudely stolen from us back in the late spring. Now, for a large majority of the people in the places where this biannual clock changing is enforced, the event passed largely unnoticed. For a select few, however, last night was a PITAS of the highest degree. Anyone working in a manufacturing plant last night had a bad time.

See at one time, we had more textile plants (factories, if you must) here in the South than a feral dog has fleas and ticks. For over a hundred years, textiles fueled this region and new cotton mills seemed to pop up like so many toadstools after a hard rain. All that wouldn’t matter as much to me except that much of my family went through a spell at one or the other local mills. In my own time, I spent a few dreary summers in one of the many textile plants owned by the richest man in South Carolina. He has always been known as a bit of a miser, so everyone in his plants worked “swing shifts”.

To the uninitiated, most factories run on three eight hour shifts: First is 8 AM to 4 PM, Second is 4 PM to 12 Midnight, and Third (or Graveyard) lasts from 12 Midnight to 8 AM. If you worked a swing shift, you would spend a week on First, then a week on Second, then a week on Third and the next week back to First. It was brutal to say the least, but in a factory running swing shifts, the owners don’t have to pay a shift premium because everyone works all the shifts. Again, for those not accustomed to the lint-head lifestyle, a shift premium is the extra pay you draw for working an “off” shift — Second or Third. Most of the time, you’d get so much more for Second and then double that for working Third. It was a way of rewarding bleary-eyed drives home in early morning and basically shooting any of one’s body’s natural circadian rhythms in the head.

Now, I gave y’all that  quasi-history lesson to tell you this — under no circumstances did you want to be working Third when the time “fell back”. See, if you don’t know, the time actually changes at 2:00 AM. Most people just set the clocks back and go to bed. Not in a cotton mill. Oh no. The one time I was unfortunate enough to get caught on fall back night, I joined a group at the time clock and watched at 2:00 as the clock wound back to 1:00 AM. A whole miserable hour of hot, lint-filled, and sweaty work was just erased like so much chaff on the wind. It was heart breaking and the worst thing was, you didn’t get paid extra even though you worked 9 hours instead of 8 because your time card would show 8 hours and not 9. The Man got an extra pound of flesh for nothing.

It’s been many a year since I walked the machine aisles picking up lint waste, but I haven’t forgotten that cruel irony. Sadly, what few manufacturing plants that still run today around here have continued that barbaric practice. Unfortunately, most of them run 12 hour shifts so the late shift works 13 hours!

Of course, “jump forward” night in the spring was different, but who wants to talk about that 🙂 !

Sleep good and enjoy waking to daylight and not dark, y’all, and as always, don’t forget to scrub your necks and wash your feet. Love y’all!