God’s gift to men-children everywhere. For some reason, all mine were green elephants and purple hippos. Coincidence? I think not.

I’ve had some people ask me if I had personal experience as my guide for my last post. To that, I can only answer “Of course!” I am still amazed by the amount of knowledge I lost on January 7, 1995. (That would be the day Budge and I started dating, in case you aren’t keeping up!) For the last ten years, I had been a passable driver, notching only one wreck in that decade. It was a GOOD wreck, but still, it was only one and, to set the record straight, Budge had TWO wrecks in the six months before we met. More importantly, I had managed for the previous 20 years to dress myself in clean and decent fashion. I admit that when I was younger, I benefited from the miracle that was the original Granimals line of clothing, but even after I outgrew my mix and match zoo, I still looked presentable.

In one day, I not only lost the ability to drive, it seems I was no longer competent to dress myself either. Strangely, the only thing different from 1-6-95 to 1-7-95 was that I had become joined at the heart, if not the hip — at first at least, to She-Who-Was-To-Be-Called-Budge. Now, to get everyone just joining us up to speed, Budge was a student where I was a first year teacher. We met. We clicked. We became the worst kept secret in the school district and the fact I didn’t get fired (at least not for our relationship) has always warmed my heart because people must have thought I was a good enough man to have a relationship like this without taking advantage of a poor, lovestruck teenage girl.

Yeah, RIGHT! If they ONLY knew how brazen my future wife was!

Anyway, when I started teaching, I was a bit strapped for clothes fit to wear in front of a classroom full of students. Four years of college will do that to a guy’s wardrobe. I did, however, have ONE outfit that I thought was, to use the student vernacular of those days, “Da Bomb!” It was a nice, heavy cloth Duck Head button up shirt that I wore with Duck Head cargo pants.

Now, if you aren’t familiar with Duck Head, you didn’t go to college in the South in the late ’80s or early ’90s. They were a ubiquitous brand of khaki pants and pastel shirts in solids, plaids, and stripes. Some of us called them “the poor man’s Polo” since they were better made but lacked some of the cachet of Mr. Lauren’s little red horsey. They certainly were a great deal more affordable, especially when every dollar one saved on clothing was money that could be put towards paying down student loans! Yeah, I know and you’re right, whatever we saved went to beer, but it’s nice to think about what might have been had we been a bit more responsible.

This is pretty close to what mine looked like. Snazzy, right?

I had this one well-made, well-maintained and — to my eye anyway — STYLISH outfit. Since I am a firm believer in the old adage, “If one guitar string breaks in the middle of the set, play harder on the other five” I wore this particular outfit once per week, every week, from the time I got my job at the school in October until the outfit’s untimely demise six months later. Now, I’ve noted the cut, construction, and origin of this outfit, but what I failed to mention, and what apparently is SUPREMELY important, is that both the shirt and the pants were green. Apparently, that presented somewhat of a problem.

This would be a good time for me to reiterate one fundamental difference between men and women that happens to be most germane to this recollection. Men, to use computer terminology, are 4 bit color depth beings. If you’ve ever hooked up a monitor to your computer that wasn’t quite compatible and it reverted back to the lowest color setting, you’ve seen color through a man’s eye. We have red, blue, green, white, black, grey, and beige (and we’re not to sure about beige.) 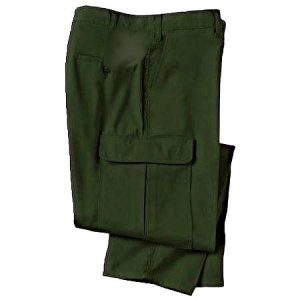 Mine were a little lighter, but this is reasonably close. Does anyone else see a problem? I certainly didn’t!

Women, however, are 256 XVGA HD 1080 color compatible. They do not have “beige.” They have eggshell, off-white, candlelight, old lace, ecru (which I always though was a bird from Australia), flat champagne, and at least ten other “shades” for what men call “beige” and which no being in possession of less than two X chromosomes could discern a difference between even if held at gunpoint.

So, I thought the shirt was green and the pants were green. No problem. To Budge, however, I discovered that the pants were “olive” and the shirt was “dark lime.” Here I thought I was supposed to wear the clothes and she’s making it sound like I need to eat them. The very first time I brought her home to meet Mama, before I had revealed to Mama that Budge was — in fact — a student which is a story for another time, Budge went into my room — later to be our room — took out my “olive” pants, brought them into the kitchen, and threw them in the trash. She then told me that I could wear THE shirt with jeans and nothing else.

Life would simpler. I might even get to buy my own clothes again!

When I pointed out to her that I had worn that same outfit once a week for six months and she had NEVER said one word about it, she had a ready reply: “I know that, honey, and I told ‘the girls’ when we first started dating that once I found out I was coming over here the first thing on the agenda was to GET RID OF THAT OUTFIT!”

That, beloved, is how I found out that green actually doesn’t “go with” green and from that day to this, I have not bought an item of clothing to be worn in public without my Budge’s express approval.

I want my Granimals back!