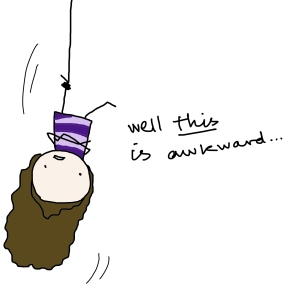 As I’ve come to understand it, Americans should get out of college and pair off. Preferably the pairs will marry, but this is no longer the rigid step it once was. As a couple, you’re allowed around two to five years to “get to know each other” and “just be the two of you,” unless you happen to announce your intention to “start a ‘family’ right away.”

In that case, babies can start showing up within a year and stop when the couple reaches their desired number, which could range from one or two in most couples’ cases, to four or five if you want to be on staff where I go to church, all the way up to “20 and counting” if you are Amish, a member of a Quiverfull sect, or want your own lucrative reality television show.

Then you raise those children, get them educated, grown and gone, then retire to a life of travel and leisure while your empty nest periodically refills with grandchildren to bounce on knees and spoil rotten. Then you die, preferably surrounded by all those loving children. THEN — if you’re Mormon and had your marriage sealed in one of the Temples — you get to go to your own planet somewhere in the universe and do this whole cycle again on a deified, planetary level.

So, based on this supposed normal cycle, Budge and I have an awkward social problem. Apparently, we’ve skipped the vital “having and raising children” and, as a result, we are the “older childless couple.”

Let me clarify by saying that we didn’t set out to be an “older childless couple.” That’s just how our life has worked out. Budge was young (18) when we married so neither of us felt a great urgency to add to the world population right away. She still had college to finish and I was a relatively new teacher.

Time passed, we got our own place, and we let nature take its course. After the obligatory five years, we were still childless. Then we found out Budge has P.C.O.S. which will make it difficult if not impossible for her to ever have children. Now that is the main roadblock to our fertility that we know of. I could have issues or she could have another issue. We haven’t ever pursued it simply because life has continually gotten in the way.

We dismissed fertility procedures right from the start. We knew we didn’t have the funds to pursue treatment then and we sure don’t have it now. The profits pharmaceutical companies and some doctors are raking in from people desperate to have a child are obscene. I think it’s borderline criminal to make so much money on another person’s misery and anxiety. Also, we’ve seen first hand and up close what an untrammeled and unfulfilled desire to have a baby can do to a couple financially, but more importantly, emotionally. We didn’t want to put each other through that ordeal when we’ve got plenty more ordeals to deal with as it stands.

We studied adoption and got super-interested in adopting a baby girl or two from China. That door closed for us when China completely overhauled its foreign adoption policies. Looking at several websites of agencies specializing in Chinese adoptions, we soon realized we didn’t meet ANY of the financial or medical criteria China now set for foreign adoptions. After our plan of adopting from China aborted before takeoff, we briefly looked at domestic adoption but abandoned that idea for one reason — money.

So we’ve been married fifteen years and we have no children and, barring a miracle or a tragedy (we are the guardians of several children in friends’ wills), we won’t have any. We’ve come to accept this way of life and found it not so bad. We love children — we wouldn’t have both gone into education if we didn’t. We have a grown niece and four nephews (and counting) that we spend time with. Some of our friends have little ones we adore and spoil as much as possible, but mostly it’s just us. That’s okay with us, but it seems to be a problem for some other people.

You don’t really understand just how much this culture worships children until you’ve been married (or even together these days) with nothing but a small home and several pets to show for it. Churches especially seem to spend a huge section of their budgets on children’s programming and facilities. If you don’t HAVE children, you become — quite without malice, I’m certain — a bit of a second class citizen. We just don’t fit into any demographic.We aren’t singles; we aren’t empty-nesters; we aren’t parents. In such a child-centered world, we are oddballs.

If I had a dime for every time some well-intentioned person asked “so when are y’all gonna have some kids?” I’d be wealthy enough to buy the child of my choice on the black market. It doesn’t make me or Budge mad and we don’t experience the agony some infertile couples do, but it still makes for an “awkward turtle”-esque pause in the conversation.

Being childless also has a few aggravating implications. We are the last people in either of our families to know of any family plans because, “y’all don’t have to worry about schedules and stuff.” The thought being, we don’t have children so we can come and go whenever it suits everyone else. Likewise, people don’t mind “volunteering” us for stuff for much the same reason. We don’t have to worry about baby-sitters. It also means we get excluded from a lot of conversations — even among our friends. I guess they think being childless makes us deaf, too; so they feel free to talk about feedings, clothing, and sicknesses as if we didn’t have anything to contribute to the conversation. We don’t have children of our own but that doesn’t mean we know nothing about children! Go figure.

The only thing that really bothers that people do is when a mother or a father looks at me when I speak up about children and says, “well, you’d think that since you don’t HAVE any children.” Well, goober, no I don’t have any children of my own, but I spent 10 years seeing how idiots like you screwed them up by the time they got to their teen years. I don’t say that much though because Budge usually starts patting me on the leg or back as soon as she hears someone say something that could set me off.

So, y’all, just keep in mind that some of us out here are childless. We didn’t choose to be, but we’re okay with the hands life dealt us — you know, “whatever condition you find yourself in be content?” All we ask is a place at the table. After all, we make great baby-sitters.

Keep those feet clean and know that I love y’all!