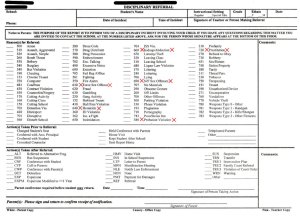 This is an actual blank discipline referral from an actual school district in this state.

In the Michael Keaton / Jack Nicholson version of Batman: The Movie, Nicholson’s Joker wonders aloud at one point, “What kind of a world do we live in where a man dressed as a bat steals all my press?” A valid question.

Here’s mine: What kind of a world do we live in where our schools’ disciplinary documents contain spaces for offenses like “forced sexual offense,” “drug trafficking”, and — most shockingly — “HOMICIDE.”

Let that one sink in for a minute. HOMICIDE. Murder. Right between “Hall Pass Violation” and “ID Violation” sits the blank for Homicide. I don’t know which is more surreal and disturbing, the fact that the line marked Homicide exists at all, or that administrators today face the very real possibility of having to check that blank.

I realize some policy item likely dictated that Homicide be included on the referral form. After all, these forms are vetted by lawyers and we ALL know what happens when someone lets a lawyer make changes to any document. Thomas Jefferson was a farmer; therefore, the Declaration of Independence is one large sheet of parchment in length and all the lines are legible. Had a modern lawyer written the DOI, it would have been the size of War and Peace by Tolstoy and that would be on Bible paper in microscopic font.

Still, it’s a sobering thought that one evening over the TV dinners, a parent could turn to little Johnny and as, “So, son, what happened in school today?” only to get the reply, “Oh, Chris stabbed Mikey to death with a pen. He got written up for Homicide so I don’t think he can come over tomorrow to play.”

Facetious? For now maybe. School murders are a reality in the worst parts of the inner cities now. How long will it take to migrate to the ‘burbs and on out into the country? Things are bad in education these days, but for most of us, we only need to look at a referral with a spot for “Homicide” to realize matters stand to get much worse and for all those who think to themselves, “That’s bull. Stuff like that won’t ever happen here,” remember how many times that phrase has been given the lie throughout history. It not only “could happen here,” but the Law of Averages pretty much guarantees it will at some point. Let’s hope we’re all gone before then, though. PASS testing is bad enough.

Love y’all and don’t forget to wash your feet.